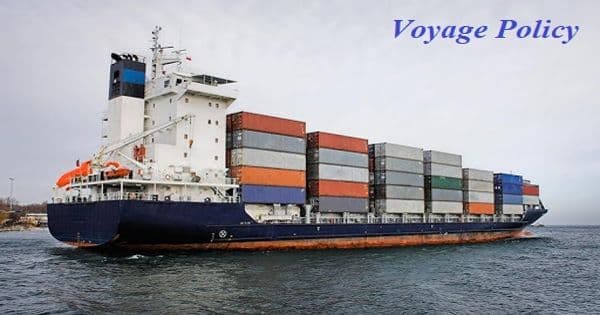 A voyage policy is marine insurance coverage for risks to a ship’s cargo during a specific voyage. It is one of the types of marine policies, which is taken to cover the risks of a particular voyage between two ports. Unlike most insurance policies it is not time-based but expires when the ship arrives at its destination. It covers only the cargo, not the ship that carries it. A voyage policy suits those businessmen or traders who rarely require marine insurance policies, or who export a relatively small amount of cargo by sea.

“Voyage policies generally cover against accidental damage and collisions as well as natural disasters. Losses due to delays may be covered as well.”

A voyage policy covers only unforeseeable and unpreventable risks. These policies are commonly used by exporters who need marine shipping only occasionally or for relatively small amounts of cargo. At the beginning of the voyage, the ship must be seaworthy for that transit for the policy to uphold. Its contract lays down the precise minute when the cover comes into effect and when it terminates. While a voyage policy insures the cargo in transit from one place to another, a time policy insures it for a definite period. 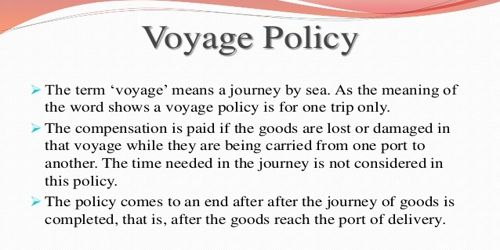 Any insurance policy is designed to indemnify the insured against risks of damage to property, the environment, or human life in the event of a natural calamity, accident, theft, etc. Voyage policies generally cover against accidental damage and collisions as well as natural disasters. Losses due to delays may be covered as well. It is considered seaworthy when it is fit to encounter the ordinary perils of the seas in the transit. Voyage policies may specifically exclude losses caused by willful misconduct, ordinary leakage, ordinary wear and tear, improper or inadequate packaging, and labor strikes. In addition, the ship’s crew must be reasonably competent. Acts of war and terrorist activity also are usually excluded. It is feasible to extend it to include extra cover against perils like a strike, riot, civil commotion, etc.

The policy covers damage caused by, for example, earthquake, lightning, fire, and collision. The policy covers the cargo during the whole voyage by sea, even if there are delays en route. It won’t cover losses or damage that occured as the result of a terrorist attack, war, or nuclear fusion. So, voyage policy is also known as marine cargo insurance.