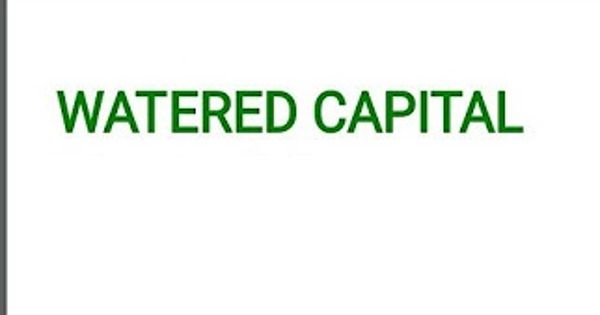 Watered capital is the value of the eroded capital on account of a company continuously incurring losses. It refers to that portion of the share capital of a joint-stock company. Which is not represented by any tangible or realizable assets; thus the amount paid for goodwill is known as watered capital. It is called so because the flow of money can be seen at the time of promotional events only and then money flows like water with the capital in the initial period at the time of promotion. It is an asset with an inflated value that is not real but has artificial significance. The reasons which lead to this situation are the excess price paid for an asset.

Watered capital is the excess of total capitalization over the real value of the long-term assets of the company. It is an asset with an inflated value that is not real but has artificial significance.

The accumulated losses and other intangible assets are viewed as a percentage of the paid-up capital and watered capital is the residual part of the paid-up capital after accounting for the number of losses. It is the excess of total capitalization over the real value of the long-term assets of the company. It can be caused by excising stock dividends, overvalued assets, and large operating losses. The assets can have these features including values that are directly related to accounts or through the excessive issues of stock.

If a business is making losses for a sustained period of time, the invested capital gets eroded. Loss is nothing but an outflow of money without a matching or lesser inflow of money. This money outflow should be from the initial invested capital plus the accumulated reserves earned from the business operation over the years.

Watered capital arises when a company pays a higher price for the assets acquired from a going concern or when the promoters’ services are highly valued. A company may start with watered capital but its working may be very efficient and its earnings may justify the amount of capitalization. In such a case, the company will not be over-capitalized even though a part of the capital is watered or not represented by an asset