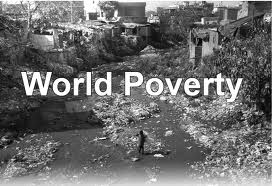 Background of the Study

Poverty remains a great concern for the whole world at this advanced stage of civilization. The advancement of science and technology is offering so many gifts to modern life but the contributions of modern science and technology are not touching the every door of mankind. A limited part of world community is enjoying the advantages of modern civic facilities. The larger part of world’s population are still away from fulfillment of basic needs. A large part of world’s population can not meet up basic needs; can not enjoy secured and dignified life. Though the planet is rich in resources but due to uneven possession and distribution of resources a large number of world’s inhabitants are identified as poor. The poverty has made a big underclass in the world. Among world’s population “1.4 billion people continue to live in extreme poverty, struggling to survive on less than US $1.25 a day. More than two thirds of them reside in rural areas of developing countries. Of the 1.4 billion people living in extreme poverty (defined as those living on less than US $1.25/day) in 2005, approximately 1 billion – around 70 per cent– lived in rural areas.”[1] So poverty conditions in rural areas have become great concern for all developing nations of the world. The poverty conditions in South Asia is very much dismal, particularly the condition of rural poverty is alarming with substandard living condition in almost all parts of this subcontinent. “Rural poverty has been declining slowly in South Asia, where the incidence is still more than 45 percent for extreme poverty and over 80 percent for US $2/day poverty.”[2]  In South Asia, Bangladesh as a developing country is beset with acute problem of poverty with a backward position of its economy. Despite government’s initiative and endeavour progress in poverty reduction is not satisfactory. Especially its rural people are hard pressed by the severity of poverty. In Bangladesh 31.5 percent people live under poverty line and in rural areas this rate is 35.2 percent.[3] Therefore, rural poverty must be given priority to address if the Millennium Development Goals (MDGs), particularly the target relating to poverty, are to be met.

The poverty conditions of Bangladeshi women are revealed in various studies. The HIES 2005 reveals that about 29.6 percent of divorced/ widowed women are living in poverty against the national average of 25.1 percent.[8] Women are more susceptible to become poor when they lose the male earning members of the family because of abandonment, divorce or death. Considering gender perspective of poverty, feminization of poverty has emerged as an important aspect of assessing poverty. Diana Pearce coins the term feminization of poverty which implies that not only are women as a group likely to be poorer than men but more women are falling into the poverty trap under the existing discriminatory socio-cultural norms and practices and economic policies.[9] Traditional social factors are acting as hindrance in the process of development of rural poor women as human resources and perpetuate the subjugation of women in rural areas. “The subordination of women is a consequence of the existing patriarchal social system which determines power relations within households and the bargaining power of household members through the organization of the family, kinship and marriage, inheritance patterns, gender segregation and associated ideologies.”[10] IFAD identifies that the neglect of women’s needs and rights undermines the potential of entire communities to grow and develop. Poverty therefore deeply rooted in the glaring imbalance between what women do and what they have – in terms of both assets and rights. IFAD also points out the economic empowerment and mobilizations of rural poor women are critical factors in reducing poverty and food insecurity and in promoting sustainable rural development.[11] Rural women are in backward position regarding poverty conditions of rural Bangladesh. They are trapped in the vicious circle of poverty. They need to break the circle and move out of the curse of poverty. This reality created a new imperative to increase understanding of the magnitude and of the multiple dimensions of poverty and human resource conditions in the country. This study tries to investigate the poverty conditions of rural poor women and the correlation between human resource development and poverty reduction. And this is the main objective of the present study. The findings of the study show that appropriate initiative has not been taken to building human resources for poverty reduction. The results of the study indicate that rural people particularly rural women still face barriers which hinder their participation in poverty reduction endeavour.

Objectives of the Study

Hypotheses of the Study

This study attenpts to explore the relation between human resource development and poverty reduction examining poverty condition of rural poor women. The hypotheses of this study have been built making congruent with the stated objectives. The study has built three hypotheses and attenpts to test those.

Hypothesis two is ‘rural poor women can be converted into human resources and can be potential contributors to poverty reduction.’ There is no substitute of skilled human resources for the attainment of sustainable development accelerating economic growth. But the women’s participation as skilled labour force in the mainstream economic activities of the nation is very low, particularly in rural areas.  Rural women have limited scope to be active participants in poverty reduction process. Mostly they are engaged in unpaid family work as unskilled manpower. Though they have potentialities, still it is remained unexplored. Through education, training and skill development they can be converted into economically active work forces. Then their participation will give expected results and will be able to contribute in poverty reduction process. The overall national development largely depends on the participation of the rural poor women in the development process.

Hypothesis three is ‘traditional social factors act as hindrance in the process of development of rural poor women as human resources and perpetuate their subjugation.’ Rural women have limited scope to take part in economic activities. Most of them are engaged in unpaid family work. Social norms and values limit their scope to go out for works. Still they are confined within the boundary of homestead, though the situation is changing very slowly. There are some social factors which act as hindrance in the process of human resource development of rural poor women like restriction in physical mobility, lack of access to information, no urban connection, absence of social network, no right to and control over assets etc. These social hindrances perpetuate the subjugation of women in the society. This subjugation leads to poverty. But national development is not possible neglecting fifty percent of total work force. Only their active participation can accelerate the overall national development. Therefore, it is hypothesized that social hindrances have created a condition where human resource development has become difficult and the lack of human resource development leads to poverty.

The chapters of this study have been designed to make a complete delineation of the research. This   study consists of the following seven chapters:

This is the introduction to the study.  Some introductory matters have been dealt with in this chapter including background, objectives, hypotheses, chapter design and limitations of the study. This chapter provides overall idea of the study in brief.

This chapter provides detailed account of the rural poverty. Chapter Four explores the rural poverty conditions at national level and in research area with special reference to rural poor women. Among total population of Bangladesh 76 percent live in rural area.[12] About 20 percent of rural household live in extreme poverty. Another 29 percent of the rural population is considered moderately poor.[13] Bangladesh is rural based country and beset with problem of poverty. In consideration of urban and rural poverty, rural poverty is the greater domain of poverty in Bangladesh. A profile of rural poverty provides a real scenario of poverty situation of the country. Women’s poverty is the major aspect of national poverty. Women are the poorest of the rural poor. So this chapter focuses on women’s poverty and draws a picture of women’s involvement in economic activities in household and assesses their position in the society.

Chapter Five gives an account of the profile of rural human resources. This chapter deals with the present conditions of human resources in rural Bangladesh. Bangladesh is in backward position in human resource development. In the rural area this situation is gloomier; especially women in rural areas are in miserable conditions. National   literacy rate (7+) is 57.91 percent and in rural area it is 53.37 percent.[14] Most of the rural labour forces are unskilled. Women are in more backward position comparing to men. Various barriers set by the society for long time limit their economic role. Still today women could not become full active participants of economic activities. These unskilled labour forces are the main role player in rural economy of Bangladesh. Ultimately their role becomes the determining factor of national economy. Therefore, their productive capabilities as work force are to be assessed. Their active and meaningful participation can accelerate development process of the nation. This chapter presents the conditions of rural human resource, especially of women in the light of data collected from the study area.

Chapter Seven is the concluding chapter of the study. It discusses the key findings relating to the objectives and research hypotheses. It contains appropriate recommendations as to poverty reduction and provides a window of initiatives for follow-up policy interventions. This chapter also explores some areas for future research in this dynamic area of poverty study.

[3].     Government of the People’s Republic of Bangladesh (2011), Report of the Household Income and Expenditure Survey 2010, Bangladesh Bureau of Statistics, Dhaka, Bangladesh, p. 61.