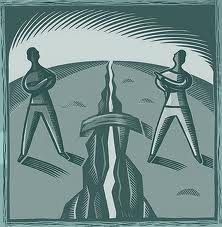 Conflict is not a single event; it is progressive by nature.  Generally there are four phases of conflict.  In the first (latent) stage, conflict is hidden.  Over time, the conflict is brought to the surface.

A conflict has five phases.

Conflicts and fighting with each other never lead to a conclusion. If you are not on the same line as the other individual, never fight, instead try your level best to sort out your differences. Discussion is always a better and wiser way to adopt rather than conflicts.