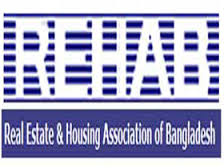 REHAB organizes its major annual event, REHAB Housing Fair, each year in Bangladesh for the members, financial institution, building material providers and above all, the potential clients. Due to the political turmoil in the country, REHAB was unable to hold the Housing Fair planned for November 06. However, the grand, yearly event will now be held in the third week of February, 2007. Besides, REHAB had already organized a few Housing Fair in New York and London during the past years. These fairs proved to be vary rewarding for the REHAB members from the business point of view, and these also served to enhance its reputation. With the requesting support and encouragement   from its members and other stake holders, REHAB will continue to uphold the sprite with its was conceived that of providing shelters with modern amenities for the citizens of Bangladesh and render social service to our society.

THE SPRITE OF REHAB:

In third world countries, urbanization is an outcome of population growth and inadequate development. Migration of the people from rural areas towards the cities also increases when their means of livelihood gradually diminishes. Bangladesh is one of the least developed countries of the world, where the basic needs of the people are not addressed effectively. At the present, with the constitution of our country being extensively and exhaustively discussed by people at all levels, the crucial issues like shelter for all, which is one of the basic rights of all citizens, still remain on the back bummers. To all intent and purposes it is not possible for the movement alone to ensure shelter for its people. Therefore, the role of the private sector developers becomes critical. In Bangladesh, Real Estate business stared its journey in Dhaka sometime in the late seventies. During this sector, with Eastern Housing and property development leading the way. In 1988 there were 42 such firms in Dhaka and now, in 2007, there are 289 companies dispensing similar service.

REHAB is the only recognize organization for real estate development in Bangladesh. Most of the Developers operating in the country are members of the association. REHAB is a class A member of the FBCCI. In recent years, REHAB has played a pioneering role in drafting the new Building Rule 2006, which has already come into effect since the beginning of this year. The Rule, known as ‘Dhaka Mohan agar Imaret Nirman Bidhimala2006’ was formulated keeping in view the rapid growth of Dhaka city. To this effect, series of meeting and seminars were held and finally the Government was persuaded to approve the formation of the’ Nagar Unnayn Committee’ comprising of experts and officials from all related Government department under the chairmanship of the secretary, Ministry, of Public works. The “Nagar Unnayan Committee” started functioning from December 06. Besides, REHAB has also developed the code of conduct for its members. The code of conduct is a policy guideline to ensure the interest of our members and valued clients so that the name and fame of REHAB continues to flourish in our society.

With the number of companies increasing gradually, various problems and difficulties concerning the grousing sector cropped up, which required proper attention. To solve these problems and to protect the interests of all property developers, it was necessary to from an association for the unhindered evolution of the real estate sector. Accordingly, in 1991, with only 11 members, the Real Estate Housing Association of Bangladesh was formed. The objective if REHAB was to promote the real estate development in the private in Bangladesh.

REHAB has its own office premises (2100 sft.) in the NationalPlaza situated in a beautiful location just opposite to Pan Pacific Sonargaon Hotel and adjacent to Sundarban Hotel. Address of REHAB Secretariat:

REHAB has a strong Secretariat with high professional and technical staffs and outsourcers consultants. Some of the services of REHAB secretariat are outlined below:

● Contribute and participate in the planning and policy making of Housing Sector.

● Development public awareness for highlighting the objective of REHAB is to               protect the interest of the customer and development as well.

● To provide support to the Foreign Investment to invest directly in the Real Estate Sector of Bangladesh and in its linkage industries on a joint venture basis.

SOME EXAMPLES OF HUMANITARIAN ACTIVITIES OF REHAB:

(5)    ” Euro Builders” project is being, implemented by the REHAB with the help of European commission.

Save as provided herein in the regulation contained in form B third Schedule of The Act and Trade Organizations Ordinance 1961 under Section-8 all such amendments incorporated vide Govt. order No. MC/ABA-6/CA-4/20021421 dt. 31.7.2002, shall apply to the Association.

The members of the Association shall consists of persons, firms, companies and corporate bodies engaged in Real Estate Development and Housing Industry who apply to the Association for Membership in the manner herein provided and whose applications are accepted by the Executive Committee.

A) The Association shall have only one class of members called General Members. The Annual Subscription of the members shall be Taka.25, 000 –

B) The Admission Fee to Association for members shall be Taka.25, 000i­

C) Every candidate for Membership shall sign and deliver to the General Secretary, duly proposed by a member and seconded by another application in the prescribed Form together with the Admission Fee and the Annual Subscription.

D) The decision of the Executive Committee for or against any candidate for admission as a member of the Association shall be final. The Committee may admit

or decline to admit a candidate as they may in their discretion think fit. The Executive

E) A candidate thus elected by the Executive Committee, shall forthwith become a

F) Members representing firms or other body, whether corporate or not, shall be severally. As well as jointly liable for payment of all subscriptions and dues in respect of their membership.

G) A list of members shall be kept in a register which shall be set forth the names and addresses of the members for the time being and in which all changes in membership from time to time taking place be recorded. The Register shall also show the trade and industry   in which they are engaged together with the names of the authorized representatives.

A notice may be served upon any member either personally or by sending it through the Registered Post at such members registered address. Any notice sent by post shall be deemed to have been served at the time when the letter containing the same would be delivered in the ordinary, course of post.