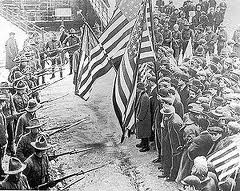 Trade union is an organization or a group that workers join so that they can have their interests and goals well represented.Today, we live in a world where workers have assumed great importance. The employers have started to realize the importance of workers. The employees too have started to form Trade Unions to protect their interests. Bosses around the world have recognized that the best way to resolve issues is by way of dialogue.The employees have realized that to protect them from exploitation, unity is very important. This is one of the reasons why trade unions have become so important today.

The origins of unions’ existence can be traced back to the 18th century, when the rapid expansion of industrial society attracted women, children and immigrants to the work force in large numbers. Trade unions were also endorsed by the Catholic Church towards the end of the 19th Century. The existence of a strong and recognized trade union is a per-requisite to industrial peace. Decisions taken through the process of collective bargaining and negotiations between employer and unions are more influential. Trade unions play an important role and are helpful in effective communication between the workers and the management. They provide the advice and support to ensure that the differences of opinion do not turn into major conflicts. The central function of a trade union is to represent people at work. But they also have a wider role in protecting their interests. They also play an important educational role, organizing courses for their members on a wide range of matters. Seeking a healthy and safe working environment is also prominent feature of union activity.

Trade unions help in accelerated pace of economic development in many ways as follows:

Trade unions are a part of society and as such, have to take into consideration the national integration as well. Some important social responsibilities of trade unions include: