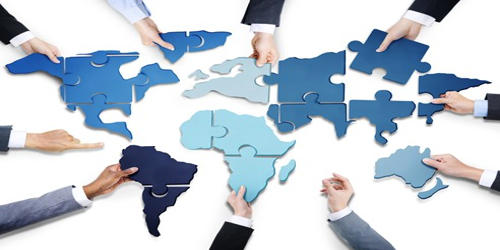 An international company is a domestic firm that uses its existing capabilities to penetrate overseas markets. It is an organization that has business operations in several markets across the globe. These companies have no foreign direct investments (FDI) and make their product or service only in their home country. There are many reasons why a company would choose to trade internationally apart from simple market expansion.

An international company is involved in exporting and selling its goods and/or services to other nations, but other than exporting (and/or importing, such as purchasing raw materials), it has no other investment in these other nations. They are importers and exporters, they have no investment outside of their home country. The company may have its headquarters in one central location, but it has subsidiary offices in each of the countries it operates in. All of the business functions and headquarters remain in the country of origin, and there are no branches of the company overseas in any of the nations the business trades with.  They have no staff, warehouses, or sales offices in foreign countries.

International companies are able to take advantage of loopholes in local tax laws to transfer profits from one country to another and thus avoid paying tax or are taxed at a very low rate. This allows a company to streamline its decision-making process, and saves the business the cost and hassle of establishing offices around the world, but can also cause the company to struggle with a lack of understanding of these particular global markets. This type of activity is perfectly legal, even though some people may think of it as a form of tax avoidance. So, International is a company that conducts business in more than one country but may or may not have an office or operation located there.