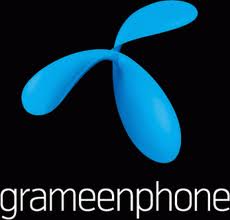 Grameenphone  widely known as GP, is the leading telecommunications service provider in Bangladesh. With more than 20 million subscribers (as of June 2008), Grameenphone is the largest cellular operator in the country. It is a joint venture enterprise between Telenor and Grameen Telecom Corporation, a non-profit sister concern of the internationally acclaimed microfinance organization and community development bank Grameen Bank. Telenor, the largest telecommunications company in Norway, owns 62% shares of grameenphone and Grameen Telecom owns the rest 38%.

Grameenphone was the first company to introduce GSM technology in Bangladesh). It also established the first 24-hour Call Center to support its subscribers. With the slogan Stay Close, stated goal of Grameenphone is to provide affordable telephony to the entire population of Bangladesh.

The idea of providing wider mobile phone access to rural areas was originally conceived by Iqbal Quadir, who is currently the founder and director of the Legatum Center for Development and Entrepreneurship at MIT. He was inspired by the Grameen Bank microcredit model and envisioned a business model where a cell phone can serve as a source of income. After leaving his job as an investment banker in the United States, Quadir traveled back to Bangladesh, after meeting and successfully raising money from New York based investor and philanthropist Joshua Mailman, and worked for three years gaining support from various organizations including Nobel Peace Prize laureate Muhammad Yunus of Grameen Bank and the Norwegian telephone company, Telenor. He was finally successful in forming a consortium with Telenor and Grameen Bank to establish Grameenphone. Quadir remained a shareholder of Grameenphone until 2004.

Grameenphone received a license for cellular phone operation in Bangladesh from the Ministry of Posts and Telecommunications on November 28, 1996. Grameenphone started operations on March 26, 1997, the Independence Day in Bangladesh.

Join the winning team
Grameenphone works to help people stay close. Serving 2 crore subscribers across the nation with superior service, a career at Grameenphone is often about making the impossible happen. Challenges are met here not by individuals but team, teams that stay close, where individuals can interact and utilize their skills to create winning solutions.
Your role at Grameenphone shall challenge and stimulate you every step of the way, giving you the chance to prove if you are a true team player and a leader in the making. Working with us means being on the winning team, always. November 28, 1996: Grameenphone Ltd. received cellular license by the Ministry of Posts and Telecommunications of Bangladesh.

March 26, 1997: Grameenphone launched its service on the Independence Day of Bangladesh.

June 1998: Grameenphone started its services in Chittagong, the second largest city and the port city of Bangladesh. Cell to cell coverage between Dhaka-Chittagong was established.

1999: Grameenphone started its service in Khulna, the industrial city of Bangladesh. Also cell to cell coverage between Dhaka and Khulna brought a number of other districts under coverage.

2000: Grameenphone started its services in Rajshahi, the education city of Bangladesh. Service also started in Sylhet and Barisal and thus all six divisional headquarters got the celluler network coverage for the first time Bnagladesh.

August 2003: Grameenphone’s subscribes base has become more than one million. Grameenphone became the first operator in the country to reach the million subscribers.

On the November 16, 2006 GP formally changed its logo to match its parent company Telenor’s logo. According to GP the new logo symbolizes trust, reliability, quality and constant progress. The name Grameenphone was kept as part of the new identity because the name Grameenphone carries with it all of the heritage, success and values of the company’s past, added the then CEO of Grameenphone Erik Aas.

Grameenphone uses the following numbering scheme for its subscribers:

880 is the ISD code for Bangladesh and is needed only in case of dialing from outside Bangladesh (otherwise, it may be substituted by a 0, making the prefix 017). 17 is the prefix for Grameenphone as allocated by the government of Bangladesh. The eight-digit number nnnnnnnn is the subscriber number.

Grameenphone has built the largest cellular network in the country with over 10,000 base stations in more than 5700 locations. Presently, nearly 98 percent of the country’s population is within the coverage area of the Grameenphone network.

Grameenphone was the first operator to introduce the pre-paid mobile phone service in Bangladesh in September 1999. It offers the pre-paid subscription under the name Easy Prepaid which is currently calld “smile prepaid”. Besides smile, Grameenphone also offers a youth based mobile to mobile connectivity within Bangladesh named djuice’.

With the help of Grameenphone, Grameen Telecom operates the national Village Phone programme, alongside its own parent Grameen Bank and the International Finance Corporation (IFC), acting as the sole provider of telecommunications services to a number of rural areas. Most Village Phone participants are women living in remote areas. Village Phone works as an owner-operated GSM payphone whereby a borrower takes a BDT 12,000 (USD 200) loan from Grameen Bank to subscribe to GP (Grameenphone) and is then trained on how to operate it and how to charge others to use it at a profit. As in September 2006, there are more than 255,000 Village Phones in operation in 55,000 villages around Bangladesh. This program has been replicated also in some other countries including in Uganda and Rwanda in Africa.

Community Information Center (CIC) or GPCIC is aimed at providing internet access and other communications services to rural areas. In February 2006, 26 CICs were established across the country as a pilot project. In this project, Grameenphone provides GSM/EDGE/GPRS infrastructure and technical support and other partners Grameen Telecom Corporation and Society for Economic and Basic Advancement (SEBA), are involved in selecting and training entrepreneurs to run the village centers. The computers in these centers in the pilot project are used by an average of 30 people a day, who pay a small fee to access email or Web pages. These CICs are used for a wide variety of business and personal purposes, from accessing health and agricultural information to using government services to video conferencing with relatives overseas. Grameenphone also trains the entrepreneurs so that they can give people advice on how to set up an e-mail account and best make use of the Internet.

CIC project is giving up to 20 million people the chance to use the Internet and e-mail for the first time. Following a successful pilot project, Grameenphone is going to set up approximately 560 centers in communities throughout Bangladesh by the end of 2006. The centers will be located in each Upazila (sub-district) of Bangladesh. As a result, up to 15 villages containing up to 40,000 people will be within reach of each CIC. In this information center, there will be personal computers connected to Grameenphone’s existing GSM mobile network, which has been upgraded with EDGE technology to offer data transfer speeds of up to 16 kilobytes per second. A gpc at Gulshan, Dhaka. A franchised gpc at Tejgaon, Dhaka.

A grameenphone center (GPC) serves as a “one stop solution” for customers, with all telecommunications products and services, under a single roof. A grameenphone center also sells phones from vendors like Nokia, Samsung, Motorola,Sagem and Benq. EDGE/GPRS modems and accessories such chargers and headphones are also sold at GPCs.

As of September, 2007, there are 76 GPCs and they are strategically located at all major locations of the country is operated by Grameenphone. As of late most of the newly opened gpc’s are franchised. Most of these franchised outlets are in non-metropolitan areas.

The GPCs also provide the flexiload service without charging extra for small denominations unlike many retailers in the country. Thus making the gpc’s and ideal place for many for such a service.

Every once a while, the GPCs tie up with handset manufactures and start a nationwide marketing scheme by selling the specific vendors products at a price lower than the market’s or in bundle with a grameenphone connection loaded with free minutes.

Grameenphone had always advertised that it is the largest taxpayer in Bangladesh. Later it emerged that they also evaded taxes in the process through clandestine illegal operations.

In October, 2007 the Government of Bangladesh fined Grameenphone USD 24.5 million for illegally depriving the government of revenue by ignoring laws requiring private operators to use the state-owned BTTB land phone network for international calls by its subscribers, when they used Voice Over Internet Protocol (VoIP) to receive such calls.

In January 2008, Bangladesh Telecommunication Regulatory Commission has filed a case against GP’s two former CEO’s and other officials for involvement in illegal VoIP business.

During Norway visit of Muhammad Yunus

After Muhammad Yunus was awarded the Nobel Peace Prize in 2006, he claimed during his visit in Norway to receive the prize that Grameen Bank had a gentlemen’s agreement with Telenor where Telenor was to sell part of GrameenPhone to the bank. Telenor was not interested in fulfilling this agreement, arguing it was not juridically binding.

At Grameenphone, we live by the statement “Development is a journey, not a destination.” Our work is not just about ensuring connectivity; it is about connecting with people and building relationships, based on trust, with our subscribers, business partners, employees, shareholders, as well as the wider community. We have always believed that good development is good business. While we maintain our business focus, taking the nation forward remains our top priority. Thus our relationship with Bangladesh is built on a partnership which strives to achieve common economic and social goals.

Corporate social responsibility, as we see it, is a ‘complementary’ combination of ethical and responsible corporate behavior, as well as a commitment towards generating greater good for the society by addressing the development needs of the country.

We are witness to the endless possibilities and the strength of the people of Bangladesh. We believe every step matters in the journey of hope we are taking together as a nation. With every connection we provide and with every opportunity we create in the community at large, we see the emergence of new possibilities. The Village Phone ladies lead us towards a silent yet powerful social revolution. The indomitable spirit of acid survivors inspires us, while the confidence of intellectually challenged athletes shows us how to make the word ‘impossible’ obsolete.

Every step inspires us to move forward and takes us one step closer to our destination. Every step counts.

In October 2006, Grameenphone launched HealthLine Service, a 24-hour MedicalCallCenter manned by registered physicians who provide medical advice and assistance. The HealthLine Service is accessible to all Grameenphone subscribers and those who register are also able to conduct consultations over the phone (their medical files are retained at the CallCenter). In Bangladesh, with one doctor per 4,000 people, this service represents a much-needed extension of primary health care services. The HealthLine Service initiative was awarded the GSMA Award for “Best use of mobile for social and economic development” at the 3GSM World Congress held in Barcelona, Spain in February 2007.

Our Customer managers are people just like your near and dear ones. They are caring brothers, caring mothers, caring sisters, caring fathers in their own families. Who better to serve with care than the ones closest to you?

Our new Customer Service campaign is a tribute to close relationships and the care it entails. It is a celebration of the magic of the closeness that Grameenphone facilitates through its superior service. You, our valued subscriber, are a member of the family we care for everyday. Remember, customer service is always beside you with the people closest to your heart. Stay Close.

As a valued subscriber of GP, you might require contacting us for any after sales service, service related queries and complaints. Kindly click on the following links for further details.