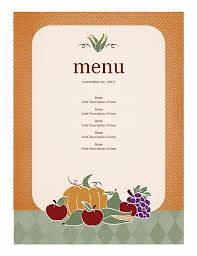 Menu is the statement of food and beverage items available or provided by food establishments primarily based on consumer demand and designed to achieve organizational objectives. It represents the focal point around which components of food service sytems are based. The menu is designed carefully what the outlet wants to cater for, keeping in mind the type of clientle. The main advantage of a well-planned menu is that it leads to consumer satisfaction. It also helps to motivate the employees for a responsible and successful service.

In a restaurant, a menu is the list of dishes to be served or available for a diner to select from. The items that are available for the diner to choose from are broken down into various categories, depending on the time of day or the event. The compilation of a menu is the most important part of a caterer’s work. It is regarded as an art, acquired only through experience and study. The menu is a link between the guest and the establishment, hence it should be carefully planned by the establishment’s professionals, namely the executive chef, the food and beverage manager and the food and beverage controller. The word menu dates back to 1718, but the custom of making such a list is much older. In earlier times, the escriteau (bill of fare) or menu of ceremonial meals was displayed on the wall loadable with the kitchen staff to follow the order in which the disheswere to be served. It is said that in olden times, menus were like a large dictionary with sections covering a variety of dishes. As time progressed the lengthy single copy menu became smaller but increased in number allowing a number of copies placed in table increased. Depending on the establishment and the occasion, the menu may be plain or artistic in its presentation.

In a restaurant, there are two different types of menus which are differentiated by the manner in which they are served and priced. A menu may be a la carte or table d’hôte.

An “A La Carte Menu”, is a multiple choice menu, with each dish priced separately. If a guest wishes to place an order, an a la carte is offered, from which one can choose the items one wants to eat.

Traditionally, the original menus that offered consumers choices were prepared on a small chalkboard, a la carte in French; so foods chosen from a bill of fare are described as à la carte, “According to the board.”

Table d’hôte is a French phrase which literally means “host’s table”. It is used to indicate a fixed menu where multi-course meals with limited choices are charged at a fixed price. Such a menu may also be called prix fixe (“fixed price”). It usually includes three or five courses meal available at a fixed price. It is also referred to as a fixed menu. Because the menu is set, the cutlery on the table may also already be set for all of the courses, with the first course cutlery on the outside, working in

towards the plate as the courses progress. In olden days, when the inns or dining establishments offering a limited choice in the menu was not preferred by the guests, they started offering an a la carte menu for guests to select the type of food they wanted to eat.

Fixed menus or table d’hote menus are still used in various forms such as buffet menus, conference packages and on special occasions. A table d’hote menu comprises a complete meal at a predetermined price. It is sometimes printed on a menu card or as in the case of banquets, it is agreed upon by the host of the party. A banquet style of fixed menu has more elaborate choices ranging from the soup to the dessert. For the banquets, the hosts invariably fix or select the menu in consultation with the hotel staff in advance.

BASIC PRINCIPLES OF ORGANIZING A MENU