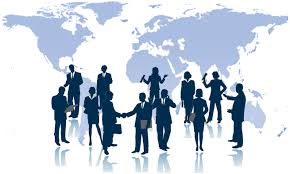 Business may be understood as the organized efforts of enterprises to supply consumers with goods and services for a profit. Business very in size, measured by the number of employees or by sales volume. The purposes of business goes beyond earning profit. It is an important institution in society.

Many a people are involved in business but some of them don’t know the actual meaning of business. Because they are supposed to run their father’s or uncle’s business with due care, it does not matter whether they are familiar with this term or not. Their knowledge may be ample for domestic business but in case of an international business they must be acquainted of some differences.

A domestic company is one that confines its activities to the local market, be it city, state, or the country it is in. It deals, generally, with one currency, local customs and cultures, business laws of commerce, taxes and products and services of a local nature. When business transactions are carried out among parties within a country’s borders is called domestic company.

International business can differ from domestic business for a number of other reasons including the following:

Mobility of factors of production: The degree of mobility of factors like labor and capital is generally less between countries than within a country. While these factors of movement can move freely within the country, there exist various restrictions to their movement across nations. Apart from legal restrictions, even the variations in socio-cultural environments, geographic influences and economic conditions come in a big way in their movement across countries.

Business regulations and policies: Coupled with its socioeconomic environment and political philosophy, each country evolves its own set of business laws and regulations.  Tariff and taxation policies, import quota system, subsidies and other controls adopted by a nation are not the same as in other countries and often discriminate against foreign products, services and capital.

Dissimilarity in currencies: Countries involved in business may use different currencies; it may force at least one party to switch its currency into another

Difference in cultures: cultures is also considered as dissimilarity in domestic and international business. . For example the difference in the use of pork and wine face different attitudes in western and Muslim cultures.

Difference in availability of resources: One country may be rich in natural resources but poor in skilled labour, while another may enjoy a productive, well-trained work force but lack natural resources. Thus, the way products are produce and the types of products that are produced vary among countries.

Before going to start an International business, people must be well-informed about cultures, legal, political and social differences among countries. They must choose the countries in which to sell their goods and from which to buy inputs with assurance and hoping that a good business is waiting ahead for them.