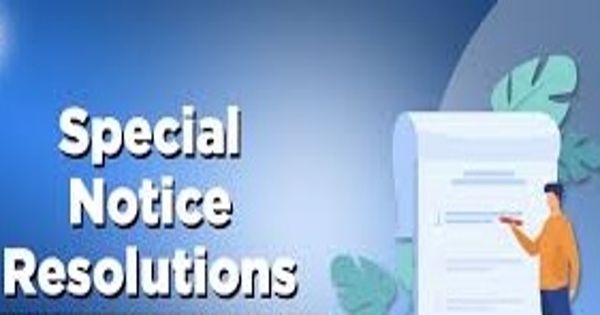 A Special Resolution may be passed in a Gen­eral Meeting of members called in the usual way with the usual notice. It is a special mode of passing a certain resolution. The companies Act 1994, provides that whereby any provisions contained in the Act or in the Articles of Association, special notice is required of any resolution, a notice of the intention to move the resolution shall be given to the company not less than 14 days before the meeting at which it is to be moved. Such a resolution is passed by an ordinary majority or special majority as per the requirement of the companies act or articles of association of a company.

A notice of intention to move the motion shall be given to the company by the proposer for certain important and serious matters. The companies Act adds that the company shall, immediately after the notice of intention to move any such resolution has been received by it, give its members notice of the resolution in the same manner as it gives notice of the meeting either by advertisement in a newspaper having an appropriate circulation or in any other mode allowed by the Articles not less than 7 days before the meeting. The notice may be given either individually or in an advertisement in a newspaper having appropriate circulation. 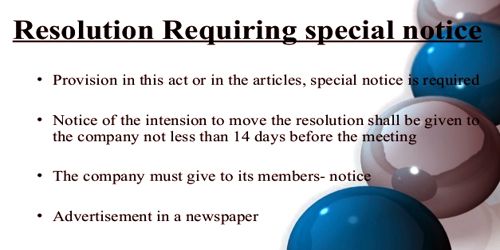 (1) Signing of special notice: A special notice required to be given to the company shall be signed, either individually or collectively by such a number of members holding not less than one percent of the total voting power.

(3) Receipt of notice: The company shall immediately after receipt of the notice, give its members notice of the resolution at least seven days before the meeting, exclusive of the day of dispatch of notice and day of the meeting.

(4) Publication of notice: Where it is not practicable to give the notice in the same manner as it gives notice of any general meetings, the notice shall be published in the English language in English newspaper and in vernacular language in a vernacular newspaper.

The following are the resolutions, requiring such special notice as per the Companies Act, 1994.