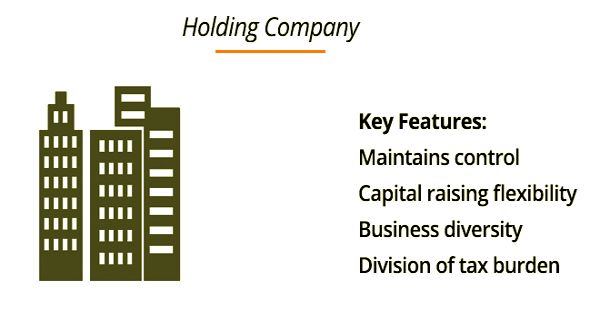 A holding company is a company created to buy and own the shares of other companies. These companies can be used to reduce tax as well as provide important non-tax related benefits. These usually don’t produce goods or services or take part in the daily operations of the business. While each situation may be different, as your company’s annual revenues and income increase, a holding company is likely something you should consider. Instead, it often owns assets that subsidiary companies use. The failure of a product of a subsidiary company will not affect the holding company.

The following are the advantages of the formation of a holding company: 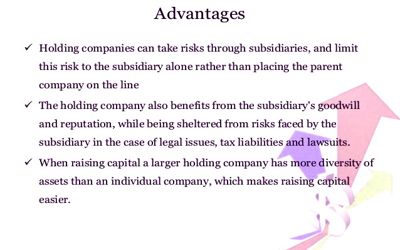 It is quite easy to form a holding company. The promoters can buy the shares in the open market. The consent of the shareholders of the subsidiary company is not required.

Both companies are maintained their account separately, the profitability and financial position of each company are known separately.

The people controlling the holding company need investment as a comparatively small amount in order to control the subsidiaries.

The financial resources of the holding and subsidiary companies can be pooled together. The company can undertake large scale projects to increase its profitability.

Both companies are maintained their identity separately. In such a case, it would be possible to avail of income tax benefit by carrying forward the losses and set off future profits. It can enjoy the advantage of quantity discounts and better credit terms because of bulk purchases. It can also get better terms from buyers in case of sales.

If a holding company holds different subsidiary companies, each of which performs functions at the different stages of production, the companies, as a whole, will not have to depend upon other companies in their activities from procurement of raw materials.

Secrecy can be maintained as the authority and decision making are centralized. It can protect itself from adverse publicity.