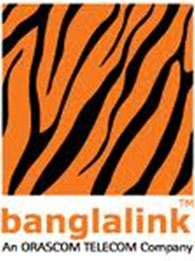 Banglalink GSM (ORASCOM Telecom Bangladesh Limited) is a 100% owned subsidiary of ORASCOM Telecom Holding S.A.E., Egypt, (“OTH”) in Bangladesh. It was acquired by OTH in 2004, and after a complete overhaul and the deployment of a new gsm network, its telecommunication services were re-launched under the brand name banglalink. When banglalink began operations in Bangladesh in February 2005, its impact was felt immediately: overnight mobile telephony became an affordable option for customers across a wide range of market segments.

Banglalink’s success was based on a simple mission: “bringing mobile telephony to the masses” which was the cornerstone of its strategy. Banglalink changed the mobile phone status from luxury to a necessity and brought mobile telephone to the general people of Bangladesh and made a place in their hearts. The mobile phone has become the symbol for the positive change in Bangladesh.

Growth over the last years have been fuelled with innovative products and services targeting different market segments, aggressive improvement of network quality and dedicated customer care, creating an extensive distribution network across the country, and establishing a strong brand that emotionally connected customers with banglalink.

Sheba Telecom (PVT Ltd)-after talking lots- finally was granted license in 1989 to operate in the rural areas of 199 upazilas. Later it obtained GSM license in 1996 to extend its business to cellular mobile, radio telephone services. It launched operation in the last quarter of 1997 as a Bangladesh-Malaysia joint venture.

In July, 2004, it was reported that Egypt based ORASCOM Telecom is set to purchase the Malaysian stakes in Sheba Telecom through a hush-hush deal, as Sheba had failed to tap the business potentials in Bangladesh mainly due to a chronic feud between its Malaysian and Bangladeshi partners. An agreement was reached with ORASCOM worth US$25 million was finalized in secret. The pact has been kept secret for legal reasons, considering financial fallout and because of the feud.

The main reason for the undercover dealing was the joint venture agreement between the Bangladeshi and the Malaysian partners, which dictates that if any party sells its Sheba shares, the other party will enjoy the first right to buy that.

Integrated Services Ltd. (ISL), the Bangladeshi partner, was being ‘officially’ shown as purchasing the shares held by Technology Resources Industries (TRI) of Malaysia for $15 million. ISL then paid another $10 million to Standard Chartered Bank to settle Sheba’s liabilities.

In September, 2004, ORASCOM Telecom Holdings purchased 100% of the shares of Sheba Telecom (Pvt.) Limited (“Sheba”). It was acquired for US$60 million. Sheba had a base of 59,000 users, of whom 49,000 were regular when it was sold. Afterward it was re-branded and launched its services under the “Banglalink” brand on February 10, 2005. Banglalink’s license is a nationwide 15-year GSM license and will expire in November, 2011.

ORASCOM Telecom Holding S.A.E (“ORASCOM telecom” or “OTH”) was established in 1998 and has grown to become a major player in the global telecommunications market. OTH is considered among the largest and most diversified network operators in the Middle East, Africa, and south Asia. ORASCOM telecom is a leading mobile telecommunications company operating in eleven emerging markets having a population under license of 498 million with an average mobile telephony penetration of approximately 46% as of 31st December 2008. ORASCOM telecom operates gsm networks in Algeria (“OTA”), Pakistan (“mobilink”), Egypt (“mobinil”), Tunisia (“tunisiana”), Bangladesh (“banglalink”), and North Korea (“koryolink”). OTH has an indirect equity ownership in globalive wireless which has been granted a spectrum license in Canada. OTH was also awarded the management contract of one of the two Lebanese mobile telecommunications operators (“alfa”) from the government of the republic of Lebanon. Through its subsidiary telecel globe, OTH also operates in Burundi, the Central African Republic, Namibia and Zimbabwe. ORASCOM telecom had over 88 million subscribers as of September, 2009.

OTH’s first operation was the Egyptian company for mobile services commonly known as (“mobinil”). Mobinil is a market leader serving over 24.2 million subscribers representing a market share of 43.6% (as of September 2009). Mobinil is one of Egypt’s five largest companies on Cairo & Alexandria stock exchange (“case”) in terms of market capitalization.

In September 2004, OTH purchased 100% of Sheba telecom (pvt.) Limited in Bangladesh. OTH re-branded and launched its services as “banglalink” in February 2005. Immediately after the launch, OTH started its aggressive plans to develop banglalink into a leader in the mobile sector by rapidly expanding its gsm network to provide high quality communications services at affordable prices. Banglalink serves over 12.1 million subscribers with 24.2% market share (as of September 2009).

In the beginning of 2009 OTH has been awarded the management contract of alfa, one of two Lebanese mobile telecommunications operator, owned by the republic of Lebanon. The management contract extends for one year and is renewable for another year. Under this contract, OTH is required to increase the number of subscribers of alfa from around 600 thousand at the end of 2008 to around 1 million at the end of 2009.

Koryolink is the first 3g mobile network to operate in the democratic people’s republic of Korea (“dprk”) and is established as a joint venture between OTH (75%) and Korea posts and telecomm corp. (kptc) (25%). OTH was awarded the license to establish a 3g mobile network in dprk in January 2008. Koryolink will deliver world-class voice and data communication services to the people of the dprk.

OTH established a strong presence in the gsm association (the world’s leading wireless industry representative body) only five years after its inception. OTH’s chairman and CEO, Mr. Naguib Sawiris, was selected to join the gsm association’s CEO board in 2002. OTH is traded on the Cairo & Alexandria stock exchange under the symbol (orte.ca, orat ey), and on the London stock exchange its gdr is traded under the symbol (orteq.l, otld li).

to become one of the world’s leading telecom operators providing the best quality services to our customers, value to our shareholders and a dynamic, challenging and fun environment for our employees.

to satisfy all communication needs of the developing markets which they serve. it is our belief that there is viable economic model to serve emerging markets while availing affordable quality. we are racing to serve the largest possible number of customers, covering the most populous countries in the world. we believe that by positioning ourselves as the primary provider of communication services, we are shaping the future of the markets we serve.

Banglalink believes that its teamwork is its greatest asset. Useful contributions made by each individual bring it that much closer to its goals. The banglalink family is made up of a group of passionate individuals, uniquely qualified from diverse disciplines but working towards its vision.

banglalink ensures for the tigers/tigress:

Banglalink currently offers two prepaid plans. All the prepaid plans come in two phases—Standard (T&T incoming and outgoing with NWD and ISD) and M2M. All connections provide GPRS to subscribers.

Currently there are three postpaid plans from Banglalink for its retail customers. These packages are known as enterprise personal, which is a subset of much larger Banglalink enterprise. All packages come with T&T local, NWD, ISD and e-ISD connectivity.

Banglalink enterprise offers a wide range of products and services to suit the needs of the business community. Companies under the enterprise package are provided with a dedicated enterprise relationship manager who provides them with personalized customer care round the clock. Other benefits of enterprise include customized packages with attractive call charges and connection price, enterprise SMS broadcast, enterprise short code, international roaming, missed call alerts, free voice mail retrieval, fax and data service, call conferencing, special offer for family members and many more. It was first launched in December, 2006. The current packages are:

Prior to the launch of Banglalink enterprise, Banglalink served the business clientele through a similar platform named Banglalink professional.

Where, 880 is the ISD code for Bangladesh and is needed only in case of dialing from outside Bangladesh.

19 is the access code for Banglalink as allocated by the Government of Bangladesh. Omitting +880 will require using 0 in place of it instead to represent local call, hence 019 is the general access code.

banglalink GSM: at a glance