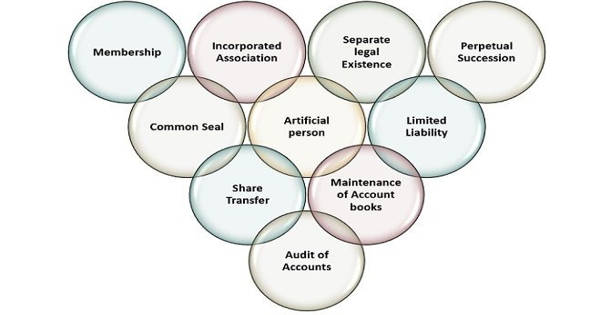 Characteristics of a Company

A voluntary association of people with common business objectives such as common capital, sharing of profit or loss, common seal, etc. is known as a company. A company is a volun­tary association of persons, recognized by law, having a distinctive name, a common seal, formed to carry on business for profit, with capital divisible into transferable shares, limited liability, a corporate body, and perpetual succession.

The literary meaning of the word ‘company’ is an association of persons formed for a common object. It is operated and managed by a ‘board of directors which are elected by shareholders. A separate legal entity, limited liability, common seal, share transferability, etc. are some key features of a company.

Following are the main characteristics of a company

A company is an artificial person created by law. A company is an artificial person and has a legal entity quite distinct from its members. So, it has a separate legal entity from its members. Being a separate legal entity, it bears its own name and acts under a corporate name; it has a seal of its own; its assets are separate and distinct from those of its members. It can hold and deal with any type of property of which it is an owner in any way like, can enter into contracts, open bank account in its own name, sue and be sued in its name and capacity.

The liabilities of shareholders of the company are limited up to their capital investment only. The liability of the members of a company is invariably limited to the extent of the face value of shares held by them. The liability of the shareholders in the public limited company is limited to the extent of the amount of share, they have subscribed to. This means that if the assets of a company fall short of its liabilities, the members cannot be asked to contribute anything more than the unpaid amount on the shares held by them. The shareholders are not liable for the payment of the excess claim of the creditors even if the capital of the company becomes insufficient.

The capital of the company is contributed by its members. It is divided into shares of a predetermined value. The shares of a company are freely transferable from one person to another person except in the case of private companies. The private companies, however, do impose some restrictions on the transfer of shares by their members.