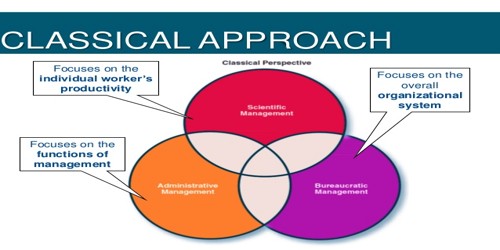 Classical approach is also known as prescriptive, rational or normative model. It specifies how decision should be made to achieve the desired outcome. Under classical approach, decisions are made rationally and directed toward a single and stable goal. It is applied in certainty condition which the decision maker has full information relating to the problem and also knows all the alternative solutions. It is an ideal way in making decision. It is rational in the sense that it is scientific, systematic and step-by-step process.

There are four main assumptions behind the classical model:

This model assumes the manager as a rational economic man who makes decisions to meet the economic interest of the organization. Classical approach is based on the following assumptions:

The classical model is supposed to be idealistic and rational but it is rarely found in practice. Therefore, this approach has many criticisms. It is known by normative theory rather than descriptive theory. Generally, managers operate under the condition of risk and uncertainty rather than the certainty condition. in many situations, complete goal stability can never be realized due to continuous environmental changes. It is applied only in the close system and not practicable in real life situations where environment is changing rapidly.

Steps in the Classical Model

First is listing all available alternatives. Under the classical model, the decision-maker is not limited by time or resources and can continue looking for alternatives until he identifies the one that maximizes the utility from the decision.

The second step is ranking listed alternatives. The decision-maker is believed to possess not only all required information but also the cognitive ability to prioritize the alternatives accurately and objectively.

The last step of the classical model is selecting the best-suited alternative.