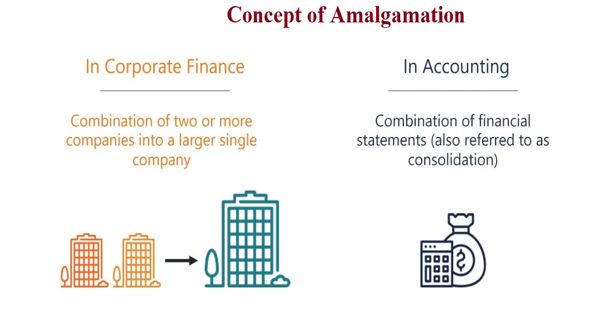 An amalgamation is a combination of two or more companies into a new entity. When two or more companies carrying on similar business go into liquidation and a new company is formed to take over their business, it is called amalgamation. It is distinct from a merger because neither company involved survives as a legal entity. In other words, amalgamation refers to the formation of a new company by taking over the business of two or more existing companies doing a similar type of business. The transferor company is absorbed into the stronger, transferee company, leading to an entity with a stronger customer base and more assets. For example, if two existing companies say, X Ltd. and Y Ltd. go into liquidation to form a new company XY Ltd., it is a case of amalgamation.

Amalgamation is done between two or more companies engaged in the same line of activity or has some synergy in their operations.

In amalgamation, two or more companies are liquidated and a new company is formed to take over the business of liquidating companies. It can help increase cash resources, eliminate competition, and save companies on taxes. The companies which go into liquidation are called vendor or amalgamating companies whereas the new company which is formed to take over the business of liquidating companies is called purchasing or amalgamated or transferee company. The new company officially becomes an entity and issues shares to shareholders of the transferor company. The transferor company is liquidated, and all assets and liabilities are taken over by the transferee company. But it can lead to a monopoly if too much competition is cut out, scale down the workforce, and increase the new entity’s debt load.

The terms of amalgamation are finalized by the board of directors of each company. The plan is prepared and submitted for approval. The main aim of amalgamation is to minimize the possibility of cut-throat competition and to secure the advantages of large-scale production. Another objective is to achieve synergetic benefits that arise when two companies can achieve more in combination than when they are individual entities.