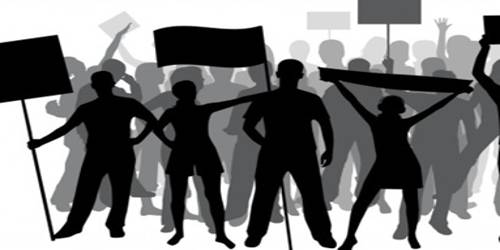 Poor industrial relations culminate labor disputes in an organization which is manifested in the form of strikes, lock-outs and other industrial actions. A labor dispute is a state of disagreement over a particular issue or group of issues over which there is a conflict between workers and employers, or about which grievance is expressed by workers or employers, or about which workers or employers support other workers or employers in their demands or grievances. The common consequences of labor disputes are loss of production, loss of profit, and even the closure of the organization. Labour unrest Is an organizing and strikes actions undertaken by labor unions, especially where labor disputes become violent or where industrial actions in which members of a workforce obstruct the normal process of business and generate industrial unrest are essayed. Disputes are common in industries; so their nature and causes are inevitable for the organization to study.

Labor Disputes means controversy between an employer and its employees regarding the terms (such as conditions of employment, fringe benefits, hours or work, tenure, wages) to be negotiated during collective bargaining, or the implementation of already agreed upon terms.

Labor disputes can be defined as conflicts or disagreements over the rights and interests of employees with the management. It means disputes are the disagreements between employees and the employers in the matter relating to organizational procedures. The contradiction can be in ideas and views of workers and managers. In a broader sense, labor dispute can occur not only between workers and managers, but also between workers and workers, or between employers and employers. Hence, such disputes are symptoms of industrial unrest in which both workers and managers try to pressurize each other. Therefore, an attempt should be given towards the settlement of disputes whenever they occur.

Through multi-channel, multi-level promotion of policies and regulations to create the employer knowing the law, workers rights activists know a good social atmosphere.

To prevent and reduce labor disputes from the source, to grasp the business dynamics and signs of labor disputes could lead to mass events and trends.

To continuously improve their operational capacity and service levels, the warm reception visiting people, labor disputes the admissibility of the complaint.

Regulate corporate employment practices, and promote compliance, according to management, to effectively prevent and reduce the incidence of labor disputes and mass emergencies.