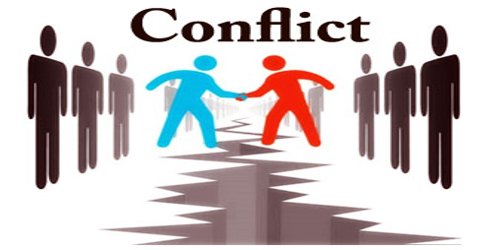 Conflict can be described as a disagreement among groups or individuals characterized by antagonism and hostility. This is usually fueled by the opposition of one party to another in an attempt to reach an objective different from that of the other party. The elements involved in the conflict have varied sets of principles and values, thus allowing a conflict to arise.

Conflict can be defined in many ways but one of the simplest is that it pertains to the opposing ideas and actions of different entities, resulting in an antagonistic state. Conflict is an inevitable part of life. All of us possess our own opinions, ideas and sets of beliefs. We have our own ways of looking at things and we act according to wham we think is proper. Hence, we often find ourselves in conflict in different scenarios; it may involve other individuals, groups of people, or a struggle within our own selves. Consequently, conflict influences our actions and decisions in one way or another.

Conflict comes naturally; the clashing of thoughts and ideas is a part of the human experience. It is true that it can be destructive if left uncontrolled. However, it shouldn’t be seen as something that can only cause negative things to transpire. It is a way to come up with more meaningful realizations that can certainly be help to the individuals involved.

Conflict can be seen as an opportunity. for learning and understanding our differences. We can all live harmoniously despite conflicts as long as we know how to responsibly manage these struggles.

Causes and Types of Conflict –

According to an American psychologist, conflicts are basically of three types arising out of three different causes:

Conflicts are also classified into the four following types:

Michael Nicholson defines Conflict as an activity which takes place when conscious beings (individuals or groups) wish to carry out mutually inconsistent acts concerning their wants, needs or obligations. Conflict is an escalation of a disagreement, which is its common prerequisite and is characterized by the existence of conflict behavior, in which the beings are actively trying to damage one another. Rakhim lists some manifestations of conflict behavior, starting with disagreement, and followed by verbal abuse and interference.