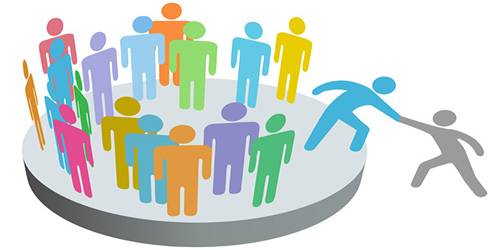 Cooperative Society is a commercial enterprise owned and managed by and for the benefit of customers or workers. It is a voluntary association started with the aim of service of its members. It is a form of business where individuals belonging to the same class join their hands for the promotion of their common goals. Historically cooperative movement in developing country has a glorious background which creates a positive influence on the development of our society. In spite of some problems in the working and administration of the cooperative societies, they have continuously contributed to the growth and development of the national economy. Cooperative means the collective attempts which are oriented by cooperation. To get rid of all sorts of discrimination, repression, inequality payment distribution, oppression from affluent persons, cooperative society, is established. It is just an organization of same minded people who are voluntarily gathered to establish to retain their rights; self-dependency & unity are the main principles of the cooperation in the society. It creates explosion because it is actually a movement of low-level wage earners or same categories of people of a country and all over the world. Govt. cordially cooperates to develop the cooperative society in Bangladesh. The objectives of the commercial organization and cooperative society are basically different. In a commercial organization, profit maximization is the main target; whereas in a cooperative society, profit is not a vital motive. The prime objectives of cooperative society to make meaning, helping the environment in our society by providing goods and services in required quantity, of better quality and at a reasonable price to its members. But for this reason, it does not mean that cooperative society is a charitable organization. It should, therefore, conduct itself in a businesslike manner in attaining its objectives efficiently.

A co-operative society has been formed behind the following broad objectives.