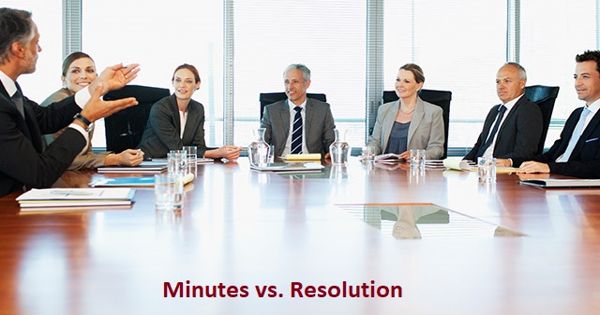 Difference between Minutes and Resolution

A minute is a brief, but a complete record of all motion and resolutions that are taken based on the discussion held among the members in a meeting on the other hand. It a written document that describes actions taken and resolutions passed by the directors during a regular board meeting. A resolution is the decision of the meeting. It is a written document that describes the actions taken by the board of directors of a corporation. It is a motion or a proposition with or without any amendment which has been adopted at the meeting.

Minutes include a statement of each resolution, a summary of its pertinent discussion, and the result of the vote on the resolution. A minute of the meeting is the overall record of what transpired in the meeting, including the name of the attendees. Resolution of a meeting is when a complaint is solved, done.

A minute is a written record of what has happened at a meeting. A resolution is a record of any decisions made at the meeting.

Difference between Minutes and Resolution