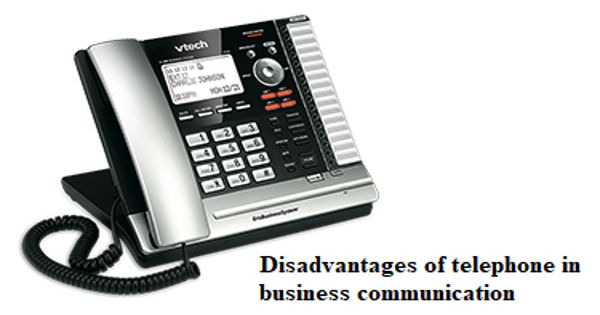 Disadvantages of telephone in business communication

Telephone technology has increased dramatically over the last few years, making this issue a little more complicated in the post-Smartphone world. Telephones are a necessary part of doing business, but since they were invented in 1876, they’ve come an extremely long way. Though the telephone was invented for human welfare it has both.

Some most common disadvantages of the telephone –

The telephone is a little bit expensive for video calls and SMS on the other hand voice call, video calls, sending SMS through the internet is very cheap and this is the great facility of the internet.

In long term use it cause headache and permanent damage to the brain especially when it is a mobile phone.

One of the greatest disadvantages of the telephone is it is often used for threats for various purposes.

Because of network problems, we can not talk properly sometimes and this is a very annoying limitation of a telephone.

Undoubtedly telephone really plays a vital role for various purposes including business but the telephone west a huge time of teens. Often they chat a long time with their friends and waste their valuable time of the study.

Sometimes the telephone causes miscommunication among people like some misunderstanding because of the same word.

Though the number of miss calls goes down but still now some time call goes to the wrong number and this is very disturbing sometimes.

Telephones and mobile increase the habit of laying in society because people on the other side cannot judge.

The telephone cannot provide face-to-face conversation and this is one of the most common disadvantages of the telephone though if someone uses 3G or 4G they can make a video call.

Sometimes the voice can’t come clearly because of network problems. Most people know about these disadvantages of the telephone.

However, some research has also shown that the majority of cell phone use in the workplace is actually focused on entertainment and social communication. So, instead of communications technology increasing our workload, it may actually be increasing our social obligations instead.