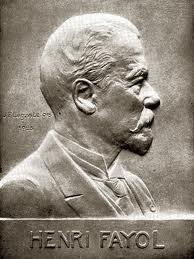 Henri Fayol (born 1841 in Istanbul; died 1925 in Paris) was a French management theorist. Henri Fayol was one of the most influential contributors to modern concepts of management, having proposed that there are five primary functions of management:

Controlling is described in the sense that a manager must receive feedback on a process in order to make necessary adjustments. Fayol’s work has stood the test of time and has been shown to be relevant and appropriate to contemporary management. Many of today’s management texts including Daft (2005) have reduced the five functions to four: (1) planning, (2) organizing, (3) leading, and (4) controlling. Daft’s text is organized around Fayol’s four functions.

Fayol believed management theories could be developed, then taught. His theories were published in a monograph titled General and Industrial Management (1916). This is an extraordinary little book that offers the first theory of general management and statement of management principles.

Fayol suggested that it is important to have unity of command: a concept that suggests there should be only one supervisor for each person in an organization. Like Socrates, Fayol suggested that management is a universal human activity that applies equally well to the family as it does to the corporation.

Fayol has been described as the father of modern operational management theory (George, p. 146). Although his ideas have become a universal part of the modern management concepts, some writers continue to associate him with Frederick Winslow Taylor. Taylor’s scientific management deals with the efficient organisation of production in the context of a competitive enterprise that has to control its production costs. That was only one of the many areas that Fayol addressed. Perhaps the connection with Taylor is more one of time, than of perspective. According to Claude George (1968), a primary difference between Fayol and Taylor was that Taylor viewed management processes from the bottom up, while Fayol viewed it from the top down. George’s comment may have originated from Fayol himself. In the classic General and Industrial Management Fayol wrote that “Taylor’s approach differs from the one we have outlined in that he examines the firm from the “bottom up.” He starts with the most elemental units of activity — the workers’ actions — then studies the effects of their actions on productivity, devises new methods for making them more efficient, and applies what he learns at lower levels to the hierarchy…(Fayol, 1987, p. 43).” He suggests that Taylor has staff analysts and advisors working with individuals at lower levels of the organization to identify the ways to improve efficiency. According to Fayol, the approach results in a “negation of the principle of unity of command (p. 44).” Fayol criticized Taylor’s functional management in this way. The most marked outward characteristics of functional management lies in the fact that each workman, instead of coming in direct contact with the management at one point only, receives his daily orders and help from eight different bosses(Fayol, 1949, p. 68.) Those eight, Fayol said, were (1) route clerks, (2) instruction card men, (3) cost and time clerks, (4) gang bosses, (5) speed bosses, (6) inspectors, (7) repair bosses, and the (8) shop disciplinarian (p. 68). This, he said, was an unworkable situation, and that Taylor must have somehow reconciled the dichotomy in some way not described in Taylor’s works.

Fayol graduated from the mining academy of St. Etienne (Ecole des Mines de Saint-Etienne) in 1860. The nineteen-year old engineer started at the mining company Compagnie de Commentry-Fourchambeau-Decazeville, ultimately acting as its managing director from 1888 to 1918. Based largely on his own management experience, Fayol developed his concept of administration. The 14 principles of management were discussed in detail in his book published in 1917, Administration industrielle et gerale. It was first published in English as General and Industrial Management in 1949 and is widely considered a foundational work in classical management theory. In 1987 Irwin Gray edited and published a revised version of Fayol’s classic that was intended to free the reader from the difficulties of sifting through language and thought that are limited to the time and place of composition. A principle of work allocation and specialisation in order to concentrate activities to enable specialisation of skills and understandings, more work focus and efficiency.

If responsibilities are allocated then the post holder needs the requisite authority to carry these out including the right to require others in the area of responsibility to undertake duties.

The generalisation about discipline is that discipline is essential for the smooth running of a business and without it – standards, consistency of action, adherence to rules and values – no enterprise could prosper. “in an essence – obedience, application, energy, behaviour and outward marks of respect observed in accordance with standing agreements between firms and its employees “

The idea is that an employee should receive instructions from one superior only. This generalisation still holds – even where we are involved with team and matrix structures which involve reporting to more than one boss – or being accountable to several clients. The basic concern is that tensions and dilemmas arise where we report to two or more bosses. One boss may want X, the other Y and the subordinate is caught between the devil and the deep blue sea.

The unity of command idea of having one head (chief executive, cabinet consensus) with agree purposes and objectives and one plan for a group of activities) is clear.

6. Subordination of Individual Interest to the General Interest

The general principle is that levels of compensation should be “fair” and as far as possible afford satisfaction both to the staff and the firm (in terms of its cost structures and desire for profitability/surplus).

The scalar chain of command of reporting relationships from top executive to the ordinary shop operative or driver needs to be sensible, clear and understood.

The level of generalisation becomes difficult with this principle. Basically an organisation “should” provide an orderly place for each individual member – who needs to see how their role fits into the organisation and be confident, able to predict the organisations behaviour towards them. Thus policies, rules, instructions and actions should be understandable and understood. Orderliness implies steady evolutionary movement rather than wild, anxiety provoking, unpredictable movement.

Equity, fairness and a sense of justice “should”pervade the organisation – in principle and practice.

Time is needed for the employee to adapt to his/her work and perform it effectively. Stability of tenure promotes loyalty to the organisation, its purposes and values.

At all levels of the organisational structure, zeal, enthusiasm and energy are enabled by people having the scope for personal initiative. (Note: Tom Peters recommendations in respect of employee empowerment)

Here, Fayol emphasises the need for building and maintaining of harmony among the work force , team work and sound interpersonal relationships.