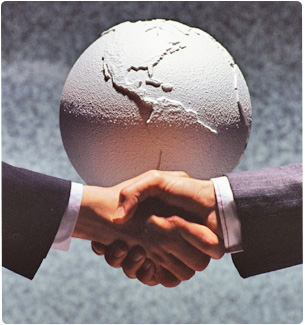 How International Company is different from domestic company

Assignment on How International Company is different from domestic company

Domestic company is the exchange of goods, services, or both within the confines of a national territory. They are always aimed at a single market. It always deal with only one set of competitive, economic.

International company exchange of capital, goods, and services across nations is called International Trade. It is always a major source of economic revenue for any nation and in absence of the same nations.

Differences between International company and Domestic company are:

Describe to below in Differences between International and Domestic company are:

Scope: Scope of international company is quite wide. It includes not only merchandise exports, but also trade in services, licensing and franchising as well as foreign investments. Domestic company pertains to a limited territory. Though the firm has many business establishments in different locations all the trading activities are inside a single boundary.

Benefits: International company benefits both the nations and firms. Domestic company have lesser benefits when compared to the former.

To the nations: Through international company nations gain by way of earning foreign exchange, more efficient use of domestic resources, greater prospects of growth and creation of employment opportunities. Domestic company as it is conducted locally there would be no much involvement of foreign currency. It can create employment opportunities too and the most important part is business since carried locally and always dealt with local resources the perfection in utilisation of the same resources would obviously reap the benefits.

To the firms: The advantages to the firms carrying business globally include prospects for higher profits, greater utilization of production capacities, way out to intense competition in domestic market and improved business vision. Profits in domestic trade are always lesser when compared to the profits of the firms dealing transactions globally.

Market Fluctuations: Firms conducting trade internationally can withstand these situations and huge losses as their operations are wide spread. Though they face losses in one area they may get profits in other areas, this provides for stabilizing during seasonal market fluctuations. Firms carrying business locally have to face this situation which results in low profits and in some cases losses too.

Modes of entry: A firm desirous of entering into international company has several options available to it. These range from exporting/importing to contract manufacturing abroad, licensing and franchising, joint ventures and setting up wholly owned subsidiaries abroad. Each entry mode has its own advantages and disadvantages which the firm needs to take into account while deciding as to which mode of entry it should prefer. Firms going for domestic trade does have the options but not too many as the former one.

To establish business internationally firms initially have to complete many formalities which obviously is a tedious task. But to start a business locally the process is always an easy task. It doesn’t require to process any difficult formalities.

Purvey: Providing goods and services as a business within a territory is much easier than doing the same globally. Restrictions such as custom procedures do not bother domestic entities but whereas globally operating firms need to follow complicated customs procedures and trade barriers like tariff etc.

Sharing of Technology: International company provides for sharing of the latest technology that is innovated in various firms across the globe which in consequence will improve the mode and quality of their production.

Difference in cultures is also considered as dissimilarity in domestic and international business. The cultures of the countries may vary according to the use of trading product and it may force each party to adjust its behavior to meet the expectation of the others. For example the difference in the use of pork and wine face different attitudes in western and Muslim cultures.

difference in legal systems of countries; it may compel one or more parties to adjust their practices to comply with local law. Occasionally, the consent of the legal systems may act as a barrier and be irreconcilable, creating complications for international managers.

difference in availability of resources by country. One country may be rich in natural resources but poor in skilled labour, while another may enjoy a productive, well-trained work force but lack natural resources. Thus, the way products are produce and the types of products that are produced vary among countries. Currently, this is the major difference noticed in the business between developed and third world countries.

An international company is a business whose activities are carried out across national borders. This differs from a domestic company is a business whose activities are carried out within the borders of its geographical location.A domestic company is one that confines its activities to the local market, be it city, state, or the country it is in. It deals, generally, with one currency, local customs and cultures, business laws of commerce, taxes and products and services of a local nature. The international company, on the other hand deals with businesses and governments in one or more foreign countries and is subject to treaties, tariffs. currency rates of exchange, politics, cultural differences, taxes, fees, and penalties of each country it is doing business in. It may also be conducting business in it’s home country, but the emphasis is on trading in the international marketplace.