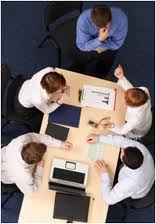 Opinion leadership is a concept that arises out of the theory of two-step flow of communication propounded by Paul Lazarsfeld and Elihu Katz. This theory is one of several models that try to explain the diffusion of innovations, ideas, or commercial products.

The opinion leader is the agent who is an active media user and who interprets the meaning of media messages or content for lower-end media users. Typically the opinion leader is held in high esteem by those who accept his or her opinions. Opinion leadership tends to be subject specific, that is, a person that is an opinion leader in one field may be a follower in another field. An example of an opinion leader in the field of computer technology, might be a neighborhood computer service technician. The technician has access to far more information on this topic than the average consumer and has the requisite background to understand the information, though the same person might be a follower at another field (for example sports) and ask others for advice.

In his article “The Two Step Flow of Communication” by Elihu Katz, he found opinion leaders to have more influence on people’s opinions, actions, and behaviors than the media. Opinion leaders are seen to have more influence than the media for a number of reasons. Opinion leaders are seen as trustworthy and non-purposive. People do not feel they are being tricked into thinking a certain way about something from someone they know. However, the media can be seen as forcing a concept on the public and therefore less influential. While the media can act as a reinforcing agent, opinion leaders have a more changing or determining role in an individual’s opinion or action.

In his article, Elihu Katz answers the question, who is an opinion leader? The three aspects of an opinion leader are related to: 1) the personification of his/her values ( who one is) 2) his/her competence (what one knows) 3) his/her location (who one knows)

Key opinion leaders (KOLs) are physicians who influence their peers’ medical practice, including but not limited to prescribing behavior. Pharmaceutical companies generally engage key opinion leaders early in the drug development process to provide advocacy activity and key marketing feedback [1]. Key opinion leaders generally belong to a specific area of expertise, such as oncology, cardiology, diabetes, or sometimes do specialized work in very niched therapeutic areas such as Colorectal Cancer (CRC), Non Small Cell Lung Cancer (NSCLC). Some KOLs also belong to administration, the FDA or EMEA. Because of a KOLs’ stature in their niche area, they are often asked by payers and regulators (insurance companies, governments) for advice on approval, reimbursement and listing on a drug formulary. Pharmaceutical companies engage KOLs in publications, conducting of clinical trials, or conducting marketing research through online panels.

In a strategic attempt to engage the public in environmental issues and his nonprofit, The Climate Project, Al Gore utilized the concept of opinion leaders. Gore found opinion leaders by recruiting individuals who were educated on environmental issues and saw themselves as influential in their community and amongst their friends and family. From there, he trained the opinion leaders on the information he wanted them to spread and enabled them to influence their communities. By using opinion leaders, Gore was able to educate and influence many Americans to take notice of climate change and change their actions.