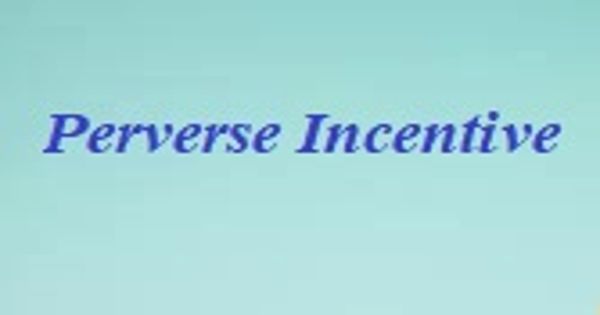 The perverse incentive is a widespread phenomenon reported in various contexts and organizations. It is an incentive that has an unintended and undesirable result that is contrary to the intentions of its designers. Despite this, there are no theoretical approaches from a management perspective. It is usually a benefit, reward, or cost that motivates an economic action. As humans, we are going to do whatever it takes to make ourselves as well off as possible, therefore incentives matter because self-interest makes the world go around.

A perverse incentive is a negative unintended consequence of a performance goal, evaluation criteria, incentive program, regulation, or system.

A perverse incentive is an incentive, either positive or negative, that has an unintended and undesirable result that is contrary to the interests of the buyer. Perverse incentives are a type of negative unintended consequence. These are incentives that result in unintended negative consequences due to actions people take to receive the incentive. A classic example of a perverse incentive occurred when the British government offered a bounty for dead cobras with the intent of decreasing the wild cobra population. Example: In Hanoi, under French colonial rule, a program paying people a bounty for each rat pelt handed in was intended to exterminate rats. Instead, it led to the farming of rats.

Perverse incentives are a common occurrence because decision-makers don’t always think things through before acting, often with disastrous results. However, enterprising people began to breed cobras for the income. When the government became aware of this, the reward program was scrapped, causing the cobra breeders to set the now-worthless snakes free. As a result, the wild cobra population further increased. Perverse incentives often arise when governments interfere with markets and fiddle with prices.

Economic incentives are what motivate you to behave in a certain way, while preferences are your needs, wants, and desires. Perverse incentives are some aspect of a service or benefit which creates perverse incentives to utilize it. The term cobra effect was coined to describe a situation where an attempted solution to a problem actually makes the problem worse.