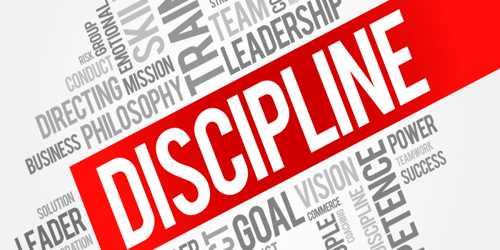 Administration of discipline is a process of making employees disciplined at work, In actuality, however, intervening with discipline is often a necessary part of the employee management process. The general guidelines developed by behavioral scientists for administering discipline are as follows:

Discipline Should Be Corrective

Discipline Should Be Progressive

It is generally desirable for discipline to be progressive. So to say, disciplinary actions must follow a series of sequential actions or steps with increasing severity of punishment in every next step. Although the type of disciplinary action depends upon the frequency and nature of the problem, it should be a progressive one. This means any disciplinary action should follow a procedure of progressive approach that proceeds from an oral warning to written warning to suspension to dismissal. For example, progressive discipline should begin with an oral warning and proceed through a written warning, suspension, loss of seniority, loss of increment, and, only in most serious cases, dismissal or some such harsh punishment.

The rule of ‘hot stove’ holds the philosophy that any disciplinary action should be quick reactive, immediate thereby leaving no question of cause and effect. When we touch a burning stove we get an immediate response. We have ample warning that we should not touch the burning stove.

Therefore, the administration of discipline should also be immediate, with the warning, consistent, and impersonal. These guidelines are consistent with the positive approach to discipline.

This states that the employees should be given an ample opportunity to clarify the matter before initiating any disciplinary action. This means the employees should be provided with a chance to explain their position so that the real cause of such problems can be found out. Sometimes errors may occur due to misunderstanding and in the influence of others. In such situation, a severe disciplinary action will not be ethical.