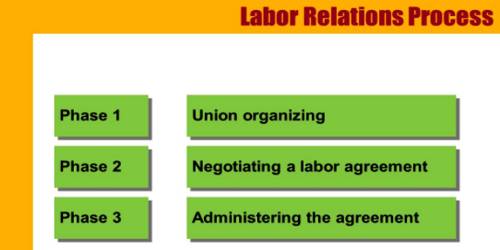 Labor relation is a step-by-step procedure that begins with the unionization of employees, moves through dispute/conflict to collective bargaining, to the resolution of conflict, and lastly ends with the direction of contract.

The first step of labor relation is unionization of employees. Non-unionized workers are those who are not members of a union and do not have union representation in the workplace. A trade union is defined as an organization of employees that is formed to protect and promote the interest and welfare of employees in the organization. It is continuing and long-term process that is targeted to form and maintain the specific purpose of blue collar workers. It is a voluntary organization of workers that protect their interests through collective bargaining.

Collective bargaining is the negotiation process that takes place between an employer and a group of employees when certain issues arise. It is a negotiation about working terms and conditions between an employer and the trade unions. The negotiated agreement serves as a code defining the rights and duties of each employee. When disputes are conflicts are arisen in the work environment, such hurdles are solved through collective bargaining between concerned parties. hence, it is the next step in employee relation process.

In this step of labor relation, the disputes or conflicts are settled through a negotiation. Both of the conflicting parties (employees and employers) agree upon a consensus and sign on a contract to settle the existing problem. Hence, it serves a way for future disputes to be settled under a mechanism. This brings an effective work environment in the actual workplace.

This is the last step of labor relation process in which a monitoring team is formed to monitor the effectiveness of signed contract whether it is followed by the disputing parties. Contract administration is the management of contracts made with customers, vendors, partners, or employees. This means a team is formed from the proportionate representation of both the disputing parties to monitor the execution of settlement of the contract.