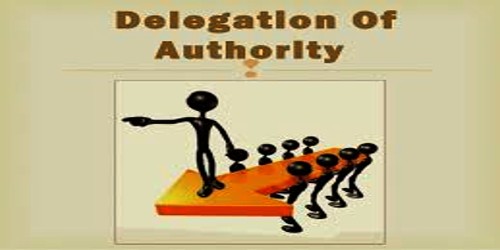 Process of Delegation of Authority

The process of assignment of specific work to individuals within the organization and giving them the right to perform those works is delegation. It is about entrusting someone else to do parts of your job. The Delegation of Authority is a process wherein the manager assigns responsibility to its subordinate along with the certain authority to accomplish the task on the manager’s behalf. It means division of authority and powers downwards to the subordinate. It is one of the most significant concepts in management practice, which affects managerial functions. The total task can divided into identifiable parts so that the manager can handle some parts himself and other parts can be given to skilled subordinates. This way the coordination and supervision would become easier. Thus, in the first stage, the duties are assigned to the subordinates as per their job roles.

The second step is to give authority to subordinates to make and implement decisions regarding procurement of resources and supervision of activities that are relevant to the duties assigned to them. At this stage, an adequate authority is delegated to the subordinate which is essential to perform the duty assigned to him. This authority must be clearly stated, and if possible in writing, so that there is no ambiguity regarding making necessary decisions.

The authority should also be related to tasks so that if the tasks change, so would the authority. A manager must make sure; that authority is strictly delegated just to perform the responsibility, as more authority may lead to its misuse by the subordinate. Any matters or decisions that do not fall within the domain of delegated authority must be referred to the superiors.

The third step is the creation of obligation on the part of the subordinates to perform their duties satisfactorily. The person assigned the task is morally responsible to do his best since he has willingly accepted these tasks

Obligation is a personal concern for the task. Even if the subordinate gets part of the task done through other people, he must accept responsibility for timely completion of the task as well as the quality of the output.

Being answerable to someone for your actions create accountability, an obligation to accept the consequences, good or bad. According to Newman, Summer and Warren, “by accepting an assignment, a subordinate in effect gives his superiors a promise to do his best in carrying out his duties. Having takes a job, he is morally bound to complete it. He can be held accountable for results.

Once the assignment is accepted by the subordinate, then he becomes responsible for the completion of the duty and is accountable to the superior for his performance.

Thus, the process of delegation of authority begins with the duties assigned to the subordinates and ends when the subordinate is obliged to carry out the operations as intended.