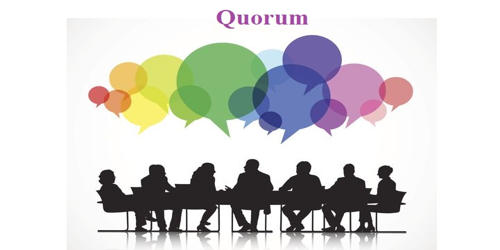 Quorum is the number of members of a group or organization required to be present to transact business legally, usually a majority. A quorum is the collective name of the minimum number of members, required by the articles to be present at a meeting so that the stated business of the meeting may be validly transacted. It refers to the minimum acceptable level of individuals with a vested interest in a company needed to make the proceedings of a meeting valid under the corporate charter. It is the minimum number of members of an assembly or society that must be present at any of its meetings to make the proceedings of that meeting valid. This clause or general agreement ensures there is sufficient representation present at meetings before any changes can be made by the board.

A quorum is a select group, it is the number (such as a majority) of officers or members of a body that when duly assembled is legally competent to transact business. According to Robert’s Rules of Order Newly Revised, the “requirement for a quorum is protection against totally unrepresentative action in the name of the body by an unduly small number of persons.” It is the smallest number of people needed to be present at a meeting before it can officially begin and before official decisions can be taken.

A quorum normally consists of a group that is considered as large as possible to be depended on to attend all corporate meetings, which is a qualitative assessment. The plural of a quorum is “quora.” It is important that the number decided on is not so small that it doesn’t accurately represent the entirety of the members, but not so large that it becomes hard to legally hold a meeting. If, for example, a company has ten board members, a quorum could be a simple majority of six board members rather than 51% of every shareholder in the company. However, when a quorum is not met during a meeting, the existing attendees are allowed to conduct up to four actions on behalf of the company.