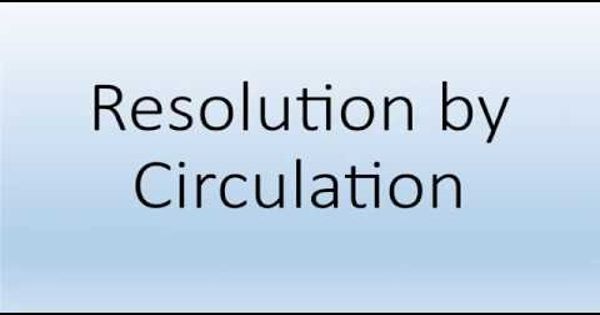 A resolution by circulation is passed when such approval is urgent in nature and cannot be kept on hold for passing such resolution in the ensuing Board meeting.

Generally, the resolution was proposed to be passed when there is urgency, or sometimes the resolution by circulation is preferred to avoid the procedural requirements of convening the physical Board Meeting. Companies Act, 1994 provides that if it is not possible to hold a Board Meeting for some reason, the board may pass resolutions by circulation. The Act has not prescribed for list of transactions that can be approved by passing a circular resolution. The number of directors among whom it is circulated must not be less than the quorum fixed for Board Meeting. However, the Company Secretary or Chairman of the company shall ensure the nature of resolution before proposing before the Board of Directors or Committee. The passing of circular resolution and maintenance of corporate secretarial documents in relation to the resolution is important from the perspective of the secretarial audit process, statutory audit process, internal audit process, and issuance of the certificate by practicing Company Secretary under Section 92(2) of the Act.

A resolution by circulation is passed when such approval is urgent in nature and cannot be kept on hold for passing such resolution in the ensuing Board meeting. But resolution by circulation cannot be made to fill the casual vacancy of directors or to make calls on shares or obtain sanction to any contract in which any director has a direct or indirect interest or to appoint a managing director or to invest in the company’s fund or to approve the appointment of a manager in more than two companies. Sometimes such matters are discussed in the earlier Board meetings but a resolution to that effect is not passed. Such decisions may include an extension of the lease agreement, opening a bank account, changing signatories of the bank account, appointing consultants, etc.