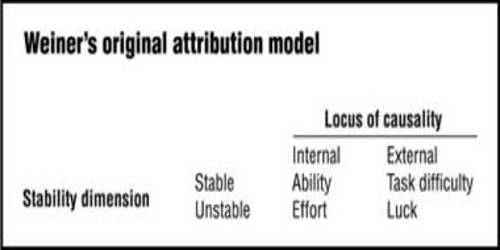 Attribution Theory explains how we attach meaning to our own, and other people’s, behavior. There are a number of theories about attribution.

Bernard Weiner’s Three-Dimensional theory of attribution assumes that people try to determine why we do what we do. According to Weiner, the reasons we attribute to our behavior can influence how we behave in the future.

For example, a student who fails an exam could attribute their failure to a number of factors and it’s this attribution that will affect their motivation in the future.

1. Stability – how stable is the attribution? For example, if the student believes they failed the exam because they weren’t smart enough, this is a stable factor. An unstable factor is less permanent, such as being ill.

According to Weiner, stable attributions for successful achievements, such as passing exams, can lead to positive expectations, and thus higher motivation, for success in the future.

However, in negative situations, such as failing the exam, stable attributions can lead to lower expectations in the future.

2. Locus of control – was the event caused by an internal or an external factor?

For example, if the student believes it’s their own fault they failed the exam because they are innately not smart enough (an internal cause), they may be less motivated in the future. If they believed an external factor was to blame, such as poor teaching, they may not experience such a drop in motivation.

3. Controllability – how controllable was the situation? If an individual believes they could have performed better, they may be less motivated to try again in the future than someone who believes they failed because of factors outside of their control.

Weiner’s Three-Dimensional theory of attribution has implications for employee feedback.

Make sure you give your employees specific feedback, letting them know that you know they can improve and how they can about it. This, in theory, will help prevent them from attributing their failure to an innate lack of skill and see that success is controllable if they work harder or use different strategies.

You could also praise your employees for showing an improvement, even if the outcome was still not correct. For example, you might praise someone for using the correct methodology even though the results weren’t what you wanted. This way, you are encouraging employees to attribute the failure to controllable factors, which again, can be improved upon in the future.