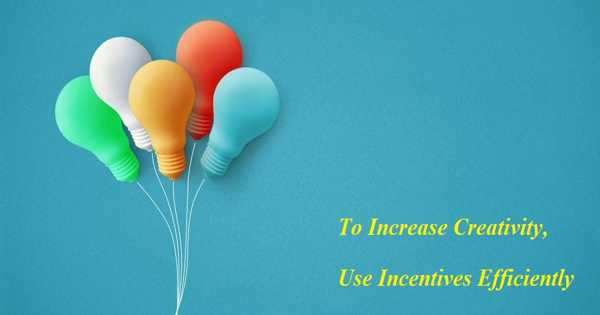 To Increase Creativity, Use Incentives Efficiently

According to a new study by management experts at Rice University, Tulane University, the University of North Carolina at Greensboro, and National Taiwan Normal University, managers should consider offering a set of rewards from which employees can choose to boost their creativity.

The selection of rewards encouraged creativity by increasing employees’ belief in their own ability to be creative. Alternative rewards also had a significant impact on increasing the creativity of employees who had previously scored highly on an assessment of creative personality traits.

The study, co-authored by Jing Zhou, the Mary Gibbs Jones Professor of Management and Psychology at Rice’s Jones Graduate School of Business, is the first to systematically investigate the effects of reward choice in a field experiment conducted within the context of an organization-wide suggestion program. A preliminary version of the paper has been published online in the Journal of Applied Psychology.

To boost employees’ creativity, managers should consider offering a set of rewards for them to choose from, according to a new study.

“Organizations invest a lot of resources and time in establishing incentive schemes that reward employees who demonstrate creativity at work,” Zhou added. “Our findings revealed that the effort may have been misplaced. Rather of finding a single reward type that is particularly good at encouraging creativity, it is more useful to give employees the option of selecting from a variety of reward types if they submit one or more ideas that are among the top 20% most innovative ones,” she says.

Workers in the study were given a choice between a financial reward for the individual employee or their team, a self-discretionary reward such as priority scheduling for select days off, or a donation made by the company to a charity chosen by the employee. Zhou and her co-authors discovered that these choices had a positive, significant effect on the number of creative ideas employees generated as well as the level of creativity of those ideas.

Rewards are consequences that improve the performance on which they are based. People have a strong motivation to seek out stimuli that increase their chances of survival as a result of evolution. Humans, with their strong intellectual and socializing abilities, are drawn to a variety of acquired rewards in addition to biologically beneficial satisfiers. Money and symbolic rewards, such as prizes, are examples of these. Rewards can also include information that is interesting in and of itself, such as sports or political news, or information that serves as a means to an end. Some rewards, such as expressions of approval, esteem, or caring, also meet socio-emotional needs.

The researchers arrived at their conclusions after conducting a quasi-experiment at a Taiwanese company for several months. The researchers then conducted a second experimental study with employees from 12 Taiwanese organizations to replicate the first study’s findings and compare them to a control group.

In terms of productivity, at least two dozen studies conducted over the last three decades have conclusively demonstrated that people who expect to be rewarded for completing or successfully completing a task simply do not perform as well as those who expect no reward at all. These studies looked at rewards for children and adults, men and women, and tasks ranging from memorizing facts to creative problem-solving to designing collages.

The studies also discovered that rewards aimed at helping others, such as donating to a charity, may be especially effective. Alternative rewards that benefit those in need, on the other hand, may reduce creativity in less creative employees and should be avoided, according to the authors.

The researchers also discovered that the choice of rewards encouraged creativity by increasing employees’ confidence in their ability to be creative. Alternative rewards also had a significant impact on increasing the creativity of employees who had previously scored highly on an assessment of creative personality traits.