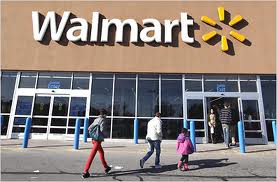 Wal-Mart was founded in 1962 by a man named Samuel Moore Walton.  He was considered “one of the most influential retailers of the century” (Wheelen & Hunger, 740).  Sam Walton started his retail career in management in 1940 with J.C. Penney Co.  His training and hard work at J.C. Penney Co. led him to his great Wal-Mart idea. He decided that small town populations would welcome, and make profitable, large discount shopping stores.  When Sam Walton created Wal-Mart in 1962, he declared that three policy goals would define his business: “respect for the individual, service to customers, and striving for excellence” (Walmartstores.com).

Wal-Mart stores “sold nationally advertised, well-known-brand merchandise at low prices in austere surroundings” (Wheelen & Hunger, 738).  The 1970’s marked significant growth for Wal-Mart with its first Wal-Mart Distribution Center as well as the Wal-Mart Home Office.  By the end of 1979, there were 276 Wal-Mart stores in 11 states and in 1991, the firm had 1,573 stores in 35 states to include the international market. Wal-Mart sales growth continued into the 1980s. Wal-Mart was divided into three business segments: Wal-Mart stores, Sam’s Clubs, and the International Division.

In 1983 the company opened its first three Sam’s Wholesale Clubs and began its expansion into bigger city markets.  Wal-Mart Supercenters were large combination stores that included a full-line grocery center, a general merchandise discount store, banks and some even offered a food court of restaurants.  Wal-Mart’s international expansion accelerated management’s plans for expansion and notoriety.   In 2000, Fortune magazine named it as one of the “100 Best Places to Work” and in 2002, “Wal-Mart officially became the world’s largest company based on its $245 billion in sales” (Wheelen & Hunger, 731).

Wal-Mart’s winning strategy in the United States was based on selling brand products at low cost while still offering the customer a quality product.  Wal-Mart is in the business of selling everything customers need in their everyday lives.  This includes the consumer goods listed above as well as food-service items.    Wal-Mart took pride in its domestic strategies and programs that were based on a set of two priorities:

1) “Customers would be provided with what they want, when they want it, all at a value”.

2)  “Treating each other as we would hope to be treated, acknowledging our total dependency on our Associate-partners to sustain our success” (Wheelen & Hunger, 747).

In the year ending January 31, 2006, Wal-Mart’s financials reflected the following: (all dollar amounts are in millions) Wal-Mart (WM) is divided into three business segments: Wal-Mart Stores, Sam’s Club, and the International Division. In 2002, “WM officially became the world’s largest company based on its $245 billion in sales” (Wheelen and Hunger 19-1).  As of January 31, 2006, the company had over 6,100 stores worldwide, bought products from 70 countries, and 20% of its business was generated outside of the United States (Wheelen and Hunger 19-2).

Wal-Mart Stores, Inc. is a global retailer committed to improving the standard of living for our customers throughout the world (Annual Report 2006).

Comparative store sales is a measure which indicates the performance of our existing stores by measuring the growth in sales for such stores for a particular period over the corresponding period in the prior year.

We earn the trust of our customers every day by providing a broad assortment of quality merchandise and services at everyday low prices (“EDLP”) while fostering a culture that rewards and embraces mutual respect, integrity and diversity. Putting Our Customers First.

EDLP is our pricing philosophy under which we price items at a low price every day so that our customers trust that our prices will not change erratically under frequent promotional activity.

Our focus for SAM’S CLUB is to provide exceptional value on brand-name merchandise at “members only” prices for both business and personal use. Internationally, we operate with similar philosophies (Annual Report 2006).

We have developed several initiatives to help mitigate this pressure and to grow comparable store sales through becoming more relevant to the customer by creating a better store shopping experience, continual improvement in product assortment and an aggressive store upgrade program to be instituted over the next 18 months.

Sam’s Club – We believe that a greater focus on providing a quality in-club experience for our members will improve overall sales, including sales in these categories.

International – A shift in the mix of products sold toward general merchandise categories which carry a higher margin (Annual Report 2006).

A. Board of Directors

Chairman of the Board,  S. Robson Walton (son of founder.)

David D. Glass Chairman of the Executive Committee of the Board of Directors

S. Robson Walton Chairman of the Board of Directors

The Company is involved in a number of legal proceedings. In accordance with Statement of Financial Accounting Standards No. 5, “Accounting for Contingencies,” the Company has made accruals with respect to these matters, where appropriate, which are reflected in the Company’s consolidated financial statements (Annual Report 2006). (T)

The Company is a defendant in numerous cases containing class action allegations in which the plaintiffs have brought claims under the Fair Labor Standards Act (“FLSA”), corresponding state statutes, or other laws (Annual Report 2006). (T)

Wal-Mart seen as a reason for closing of mom and pop stores. (T)

Wal-Mart Stores unit had 3,289 locations and included the company’s supercenters, discount stores, Neighborhood Markets in the US, and walmart.com.

Sam’s Club unit had 567 locations and included the warehouse membership clubs in the US plus samsclub.com.

Trained employees to be merchants by being responsible for the performance of their own departments. (S)

Reflection of the founder’s values. (S)

Non-Union stance is viewed unfavorably is some areas. (W)

Offered $8.5 million worth of grants from its “Safe Neighborhood Heroes” program to recognize emergency professionals. (S)

Green marketing offers the option of buying products which were better for environment. (S)

Introduced a “Value Plan” benefits plan to its employees at premiums ranging from $11 to $65 a month. (S)

11.4% increase in sales and operating income for the international business (Wheelen and Hunger 19-24). (S)

More involved with the development side. (W)

Wal-Mart USA. We are intent on driving comparative store sales by being relevant to our broad customer base and by improving our cost structure and inventory flow to strengthen return on investment. (S)

Sam’s Club. We remain committed to serving the needs of our members – where pennies matter – by leveraging productivity improvements and lowering expenses, so that we can provide the products and services they want at the lowest prices in the industry. (S)

Adjustment to cultural differences after entering a foreign market.

Pro. Creates an image with integrity

Pro. Provides a new source of tax revenue for the community

Pro. Promotes community expansion and individuals who will patronize from other communities

Pro. Opportunities for employee growth in the organization

Con. Associates may receive unjust wages due to the compensation of lower cost products

Continue to expand the brand and operations in to urban & rural areas and foreign countries. The company’s reputation of being a bully needs to be eliminated by implementing social awareness/advancement programs similar to Boys and Girls clubs or the Police Athletic League. The goal of such a program will be to invite the community to take part in Wal-Mart’s growth by mentoring, providing training, internships and/or jobs that will aid the community.

“Mom and Pop” establishments should not be taken for granted. It is not the intention of Wal-Mart to take from anyone’s dream, but to it is Wal-Mart’s goal to provide cost savings to its consumers. A possible strategy for easing the anxiety of many small business owners on the onset of Wal-Mart entering the community is offering these owners the opportunity to become a part of Wal-Mart staff in a capacity that would provide them sense of security. Offering small business owners a position will not only eradicate the discontent of loyal customers but will display Wal-Mart’s willingness to enter a community and enhance it.

With the attitude of “business is a dog eat dog world”, Wal-Mart has been able to enter the market “eat” stores that have tried to follow its precedence but have not been able to attain Wal-Mart’s recognition. Entering into foreign markets may be extremely difficult, as many nations are known for their loyalty and enriched cultures. Unlike the United States, countries like China and Japan are accustom to living with less, so the attractiveness of buying more due to cost savings may not be received as well as in the United States. It is in the best interest of Wal-Mart to establish stores in foreign markets, but to adopt the culture of the area and continue to maintain its mission of enhancement not degradation.

Management needs to be open to change regarding clashes with “grass-roots” movements that push to keep new construction of Wal-Mart stores in rural America.  While many residents welcome a new Wal-Mart, there will always be opposition and by developing ways to appease those that oppose the giant retailer, they will be more welcome to the neighborhood.

Wal-Mart has been steadily reaching into every corner of the earth, but not always with successful results.  Upper management is making the assumption that every culture will welcome box stores and the American culture that Wal-Mart is known for.  As has been proven time and again, this is not always true.  There need to be committees established that can perform thorough research before just barging onto foreign land.

Several lawsuits have been filed regarding the treatment of employees.  Wal-Mart needs to get involved with developing a way to ensure employees are getting the right benefits that is equal to the retail industry’s average worker.

Wal-Mart needs to develop “scout” teams that can visit locations of opportunity and solicit the communities concerns if Wal-Mart builds nearby.

Implement incentivized customer satisfaction surveys and employee surveys, which will increase the chance of them being completed.

Shift from monopolizing to publicly displaying how important “Mom and Pop” establishments are to our society and how Wal-Mart can effectively and efficiently incorporate these individuals and there keen sense of business into the large picture of providing consumers cost savings.