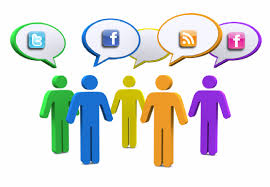 The network consists of communities of people who are discussing, sharing and conversing with one another and building opinions in the process. Therefore the advertisers and marketers do not have control. The advertising on the social network functions like traditional channels as well as in the form of non-interruption advertising. Advertisements that pop up on web pages, the banners work like traditional channels and are interruption, whereas the new kind of advertising and marketing known as Embedded Marketing Application has introduced non-interruption as well as interactive advertising.

The basis of the mass media both in print as well as in visual form is to release one common advertisement to the entire mass in general. Such advertising is controlled by the marketers who have control over the release of the advertisement and the audience or the readers and viewers have very little control viewing or watching such advertisements. It is a very well known fact that most people do not enjoy the interruptions on the TV shows and the commercial breaks that beam advertisements.

The best example that one can see in terms of Embedded Marketing Application is the application called Product Pulse on Face book. The application engages the audience with new products and services by inviting them to rate the product as per their opinion and invites them to join some of the easy to win contests too. This aspect makes a lot of sense for marketers as it gives a lot of information about the consumer behavior as well as the pulse of the consumer.