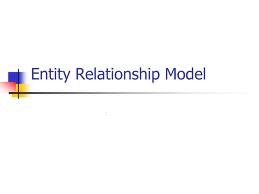 Entity  Relationship  Model  ( E-R )  data  model  is  based  on  a  perception  of  a  real  world  that  consists  of  a  set  of  basic  objects  called  entities  and  of  relationships  among  these  objects.  It  was  developed  to  facilitate  database  design  by  allowing  the  specification  of  an  enterprise scheme, which  represents  the  overall  logical  structure  of  a  database.

There are several problems that may arise when designing a conceptual data model. These are known as connection traps.

There are two main types of connection traps:

Before beginning to draw the ER model, read the requirements specification carefully. Document any assumptions you need to make.

ER modeling is an iterative process, so draw several versions, refining each one until you are happy with it. Note that there is no one right answer to the problem, but some solutions are better than others!

An  E-R  scheme  may  define  certain  constraints  to  which  the  contents  of  a  database  must  conform.

A  primary  key  is  a  field  or  combination  of  fields  that  uniquely  identify  a  record  in  a  table, so  that  an  individual  record  can  be  located  without confusion.

A foreign key is an attribute (or group of attributes) that is the primary key to another relation.

We can express the overall logical structure of a database graphically with an E-R diagram.