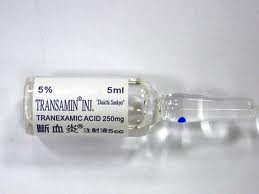 Assignment on Marketing Plan on Transamin

Transamin is a potent synthetic agent that inhibits specifically the actions of plasminogen activator and plasmin which inhibits fibrinolytic action.

Most of the resources of Transamin will be deployed around large use area i.e. in urological surgery and functional uterine bleeding.

Proposition: why this drug- what is its superiority

Transamin has following distinct features and benefits which make it completely different and preferred choice of agent by physicians community than other available products:

Promotional activities will be concentrated around almost all targeted doctors and specific departments like Urology, Gynaecology, General Surgery, Orthopaedic Surgery, Dental Surgery, etc. with frequent visits to build awareness about a safe and effective surgery.

Sales turn over is gradually increasing over the planned period (Table 9,10.11, Page 12,13,14). Gross Profit although very low but is increasing by value. Three different situations have been analysed based on three different prices. Direct expenditure as % of net sales is also decreasing. Net product contribution although negative seems to be improving over the time.

Background of the market

–          There is a general fearness about bleeding among physicians, surgeons, gynaecologists

–          Little understanding about haemostasis and bleeding by local doctors Anti-bleeding market is small but consistent in size with low growth rate. But a large number of brands will emerge as soon as RPR creates the awareness and build a new market.  Therefore, from 2001 the market is like to grow faster than its normal trend.

To establish Transamin as an agent of choice to stop per-operative (during operation) and post operative bleeding in Urology, Gynaecology, General Surgery, Orthopaedic Surgery, Dental Surgery.

Three year sales forecast of Transamin for 2001, 2002 and 2003 based on C&F price  (Table 3) offered by M/s Business Point, and two other scenario based on competitive market pricing is given below.

Table-4: Situation 2, Based on proposed price in comparison to Traxyl of Organon

Transamin has following distinct features and benefits which make it completely different and preferred choice of agent by physicians community than other available products:

Potent antiplasminic activity that diminish the need for blood transfusion

Since tranexamic acid was launched in the market few years back and supported by lot of international clinical papers/international trials. No clinical trial on Transamin as such is planned in anti-bleeding market.

However to gain confidence of local key opinion leaders a post marketing phase IV/RECORD study  will be conducted during planned period.

Following strengths have been registered by Business Point in Bangladesh:

We are planning to launch 250mg capsule, 500mg tablet and 250mg/5ml injection only at this moment, but it is essential to have all the forms available right from the beginning. Smaller pack of 6 capsule/tablet would be convenient for marketing 1-2 days therapy. It is also important to have two different strengths of oral form either in capsule or tablet in stead of one in capsule form and another one in tablet.

Transamin is an imported product, therefore price is given by Directorate of Drug Administration and licensing Authority with definite mark up basis which is dependent on duty structure. Pricing calculation is done based on no duty, but 15% VAT. So, 180.88% mark up should be calculated on C&F price to derive MRP, that will give 12.5% commission to retail chemists on trade price.

No provision for general discount. However a 3% discount may be offered in order to secure bulk orders initially, particularly in 2001.

Price is the key issue for institutional purchase. Since price of Transamin is relatively high than other available products. Indispensable support of opinion leaders can only be the tool for institutional business.

Through in-house distribution channel. No special precautions should be taken in order to store Transamin, since it could be stored in room temperature.

Doctors of following categories will be our customers for Transamin:

Total 664 doctors are planned to be covered, of which 50 are opinion leaders, 130 high prescribers and 484 followers.

1. Develop awareness regarding the use of an antiplasminic agent in high risk surgeries : a priority in order to create the need and develop Transamin prescriptions:

b) support of opinion leaders is a necessity

2.  Impose Transamin as an agent of choice in the segment where it has the most important

4.  Reinforce the image of efficacy by launching all dosage forms/strengths

5. Focus and limit our promotion in hospital through a hospital team: commitment, willingness to succeed

Detailing, with more than 40% weightage of promotion for Transamin is planned for 2001. Weightage on doctors meetings will be 20%, and on journal service, product monographs, etc  it is 40%.

A dedicated team of 10 persons is required to promote Transamin in 2001 to selected doctors. (Table 7, Page 9). If we employ a dedicated team they will be able to make 4 calls per day since a huge portion of their time will be spent in travelling and waiting for opinion leaders and high prescribers. Alternatively we may also promote this product sharing sales force time of our existing bigger team, but sales force time will remain almost same since making sales calls to opinion leaders and high prescribers is always time consuming (4 calls per day).

In detailing, Transamin will be discussed with 1st Priority – in all cycles round the year, since it will be promoted by a dedicated team.

We should also request for following materials from Daiichi pharma, Japan for sales force and the trainer:

slides, etc. for the trainer

6     Reprints and folders, to be distributed among participants of

Contents of these programs would include haemostasis, coagulation system, pathology of fibrinolysis, product profile, competitive advantage, use of journal reprints, hospital selling, and selling skills in relation to Transamin.

A refreshers course, follow-up training would be conducted after one month of the induction training to measure the knowledge level and reinforce their activity.

For 2001, two ‘Product Reminders’ are planned. One pen and one desk organizer. These are the gifts which will have good retention value for the doctors. Product name and logo will be clearly imprinted on these gifts to ensure continuous reminder to the doctors.

Doctors meeting on Transamin will be arranged in relevant departments of all Medical College Hospitals, Orthopaedic Hospital (RIHD). We are planning to organize at least 12 meeting in 2001. If possible foreign speakers will read the key note paper.  Number of participating doctors in each meeting is about 200. Budget per meeting is about Tk. 3,00,000 (excluding travelling and honorarium of foreign speaker).

C7 Cost of above (Tk): Excluding cost of foreign speaker1

A small scale market survey will be done to prepare the market map and to calculate future market potential segment wise.

Sales turn over is gradually increasing over the planned period (Table 9,10,11, Page 12,13,14). Gross Profit although very low but is increasing by value. Three different situations have been analysed based on three different C&F and Trade Prices. Direct expenditure as % of net sales is also decreasing. Net product contribution although negative seems to be improving over the time. Table-10: Profit & Loss Account based on C&F price in comparison to Traxyl of Organon

Table-11: Profit & Loss Account based on C&F price in comparison to Tranex of Menarini

High, uncompetitive price of 250mg injection. Price should be competitive and similar with that of Traxyl of Organon and Tranex of Menarini. 500mg injection should also be introduced to compete with 500mg Tranex injection.

None. Possibility of bulk sales is less, as the concept of using anti-bleeding products is not yet popular in various hospitals and institutions.

Transamin. A potent synthetic agent, that inhibits specifically the actions of plasminogen activator and plasmin which exhibits fibrinolytic action in various traumatic situation

Create regional and/or national committee of experts to build core users and make Transamin a successful product in Bangladesh.

Utilize large portion of resources on key opinion leaders because fate of the product will mainly depend on their acceptance or rejection .