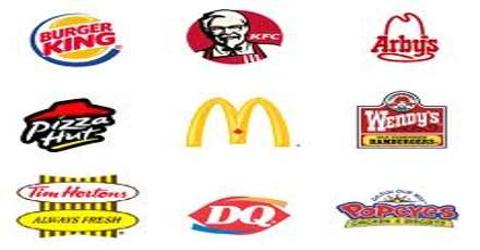 Fast food restaurant analysis is a marketing research function that shows how certain fast food restaurants compare with their competitors on sales, service and even product quality. The industry is highly labor-intensive: the average annual revenue per worker is just under $40,000. Most fast-food restaurants specialize in a few main dishes. Restaurants include national and regional chains, franchises and independent operators.

How does a Recession affect the limited-service restaurant industry?

The fast food industry pays close attention to what the American society wants and needs.

10. Threat of New Entrants Cont.:
Distribution Channels:
Speedy and reliable channels are essential among all firms in the industry, they are not necessarily difficult for new comers to attain, however. Also the economies of scale enjoyed by large firms are not so great as to shut out smaller competitors.
Government Regulation:
Government regulation is more intense for the larger firms which have to deal with franchising regulations.  Smaller establishments are subject to the standard array of government regulations including: zoning, health, safety, sanitation, and building.  These are standard for almost any new business and thus do not pose large threat to new comers.
Conclusion:
Due to the lack of any of the barriers to entry being so significant as to thwart the majority of private startups, we feel the threat of new entrants is high.
11 . Bargaining Power of Customers
Even though customer switching costs are nearly zero, the fast food industry does not worry about loyalty because “On average, one-fifth of the population of the USA eats in a fast-food restaurant each day” (Oxford University Press).  It is this volume that keeps customer bargaining power low by diluting the effect of a few picky customers.
Bargaining Power of Suppliers:
Large fast food chains thousands of suppliers to choose from and select theirs through a competitive bid process.  They can switch suppliers easily and tend to make up a large portion of the supplier’s revenue.  This severely limits the bargaining power of suppliers.

With so many firms in the quick service/burger industry, low switching costs, similar products, and healthier options, the threat of substitutes is very high.
Rivalry Among Existing Firms

The limited-service industry defines a red ocean industry.  Firms compete for market share in a saturated market.  Growth, particularly in hamburger chains, is very slow so the customer base is not growing as fast as the industry.  This leads to high rivalry among firms.

15. Positions Within the Industry

What are key success factors?
-Things that a company must do to be   successful in an industry

Key success factors are often looked at as core-competencies, which are sets of skills or systems that create a uniquely high value for customers.
21. Key Success Factors:
Differentiation
-The fast-food burger industry is difficult to differentiate on a single product, such as the burger
-Differentiation in this industry can be focused more towards your atmosphere and unique menu items
-Brand and product advertisement can also be major players in becoming a household name and bringing customers in to your industry.
22. Key Success Factors:
Competing on Low Cost
-In a synonymous industry, consumers can find a good burger at a comparable price from just about any of the competitors
-It is important to cut down on overhead cost of your firm in order to make the most off of your sales.
23. Quick-Service Restaurant Segment (QSR):
In the United States QSR is the largest segment of the restaurant industry
Growth in sales include…
Fast food chains provide consumers with food at reasonable prices which offers an alternative to cooking at home.
24. Industry Attractiveness:
The restaurant industry is highly competitive in terms of price, service, location, and food quality and is often affected by changes in consumer trends, economic conditions, demographics, traffic patterns, and concerns about the nutritional content of quick-service foods.
25. Factors that could affect the quick-service restaurant industry:

According to QSR Magazine, “Nearly 7 in 10 adults agreed in a recent National Restaurant Association survey that purchasing meals from restaurants, take-out and delivery places makes it easier for families with children to manage their day-to-day lives, and nearly eight in ten agreed that it is a better way for them to make use of their leisure time rather than cooking at home.”
29. Conclusion
Share !
Facebook Twitter WhatsApp LinkedIn Pin It Email