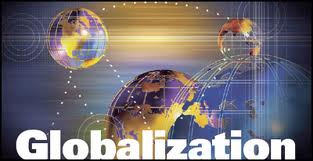 Globalization is the free movement of goods, services and people across the world in a seamless and integrated manner. Globalization can be thought of to be the result of the opening up of the global economy and the concomitant increase in trade between nations. In other words, when countries that were hitherto closed to trade and foreign investment open up their economies and go global, the result is an increasing interconnectedness and integration of the economies of the world.

Globalization is grounded in the theory of comparative advantage which states that countries that are good at producing a particular good are better off exporting it to countries that are less efficient at producing that good. Conversely, the latter country can then export the goods that it produces in an efficient manner to the former country which might be deficient in the same. The underlying assumption here is that not all countries are good at producing all sorts of goods and hence they benefit by trading with each other.

Globalization also means that countries of the world subscribe to the rules and procedures of the WTO or the World Trade Organization that oversees the terms and conditions of trade between countries.

Globalization can be seen as a positive, negative or even marginal process. And regardless of whether it works for good or ill, globalization exact meaning will continue to be the subject of debate among those who oppose, support or simply observe it.