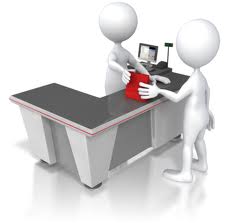 One who sells goods or commodities directly to consumers. These items are purchased from the manufacturer or wholesaler and sold to the end user at a marked up price.

Retail involves the sale of goods from a single point (malls, markets, department stores etc) directly to the consumer in small quantities for his end use. In a layman’s language, retailing is nothing but transaction of goods between the seller and the end user as a single unit (piece) or in small quantities to satisfy the needs of the individual and for his direct consumption.

Let us understand the concept with the help of an example.

Tim wanted to purchase a mobile handset. He went to the nearby store and purchased one for himself.

In the above case, Tim is the buyer who went to a fixed location (in this case the nearby store). He purchased a mobile handset (Quantity – One) to be used by him. An example of retail.

The store from where Tim purchased the handset must have shown him several options for him to select one according to his budget and need.