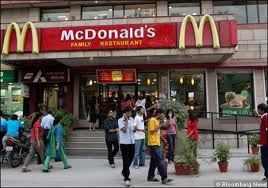 To enter a market where consuming beef is “off limits” was very challenging and ambitious. McDonald’s objective was to be inspired by the culture of India and to deliver the greatest of food experiences to the customers in India bringing in the splice of life. They were aiming for to change the local perception of the new product being “American” and remove the fear of unknown, where family “dining in” was a custom for centuries. The management wanted to advertise McDonald’s as a stimulator and advocate of family and culture values.  The diversity in language and communication is one of the greatest components of the culture. Until 2000, McDonalds advertised their brand mainly by putting the main focus on the outlet design and tailor made food menu for the needs and desires of the diverse Indian population.

McDonald’s entry into India was met with stiff opposition. Members of the Hindu organization, the Bajrang Dal, the militant arm of one of the dominant fundamentalist political parties in India, the Bharatiya Janata Part (BJP) openly protested against the company by attacking it’s branches across India on May 4th, 2001. The members of the Bajrang Dal demolished the restaurant in Thane, a northeastern Bombay suburb. In southern Bombay, a McDonald’s store was besieged by protestors from the leading Bharatiya Janata Party, who shouted slogans and stained the restaurant’s mascot with cow dung. SHIV SENA – another Hindu alliance also threatened to protest outside the McDonald’s corporate office after reports of a lawsuit being filed against McDonald’s in Seattle.

The biggest problem McDonald faced was during the launch of its product in India was the public image it was carrying as an International food chain and not matching Indian standards. There were concerns raised about how the burgers are made in McDonalds.

Offering the cheapest burger in the world was not easy. In India, McDonald’s offered a menu that did not had any beef or pork items as well as special product formulations for accommodating Indian culture and palate. Furthermore, all the vegetarian products, even the mayonnaise in vegetable burgers, were egg-less and 100% vegetarian. Additions to the menu have been a regular feature of McDonald’s in India. The company in India conducted regular qualitative as well as quantitative studies, which tracked the target consumer lifestyle in India, a practice that had followed internationally as well.

It was under these circumstances that McDonald’s India went about creating the cold chain infrastructure for its restaurants in the country. As McDonald’s always considers the quality of all its products to be of primary importance, it sets high standards for its suppliers that are amongst the biggest in the food industry. World over, McDonald’s always believed in development of close relationships with suppliers and this is precisely what it has done in India.

The environmental factors in India

As India being a very ancient country and one of the lands of the ancient river valley civilizations, McDonald’s had to consider the cultural, economical and sociopolitical factors in India. The Indian population is very diverse and complex as nation is split between different communities, religions (e.g. Hinduism, Buddhism, Sikhism, Islam, Jainism and Christianity), beliefs and value systems. All these factors play a significant role in nations’ preference for food and dining in general.

80% of the entire population of India practice Hindu which forbids non-vegetarian food (Indian Mirror, no date).  Because of this, McDonald’s initially only offered a vegetarian menu. Later they understood that this wasn’t the correct approach. To honor the cultural differences between religions, the company categorized the cooking tools as well as employees in vegetarian and non-vegetarian category. The cultural factor had to be taken into consideration in such market, as any omission can destroy the reputation globally which may limit the chances of business expansion (Rappa, A., 2007). The change in menu came also because of competitors like KFC, whom entered the market first with non-vegetarian products.

McDonald’s formulated a suitable pricing strategy that can facilitate the high volume of consumers, targeting mainly the lower and middle class. The majority of the Indian population falls into this category.

The market in India is totally different from that of the USA. Here the family dining concept works. This led to concept of breakfast combos. The restaurant was also projected this as a  fine dining restaurant.

This became the USP of McDonald’s in India.  The television commercials of  ‘Toh Aaj McDonald’s Ho Jaye’ and ‘McDonald’s Mein Hai Kuch Baat’ and the happy price menu is what attracts Indian people to McDonald’s. The new advertising of  Prices of the Yesteryears, attracted the teenager crowd too. (Mathur, S., 2011)

In order to capitalize on the highly price sensitive economy, and the Indian mentality of liking anything that is foreign, McDonald’s strategy was market penetration and the three circles strategy. This led to localization ND branding of the company. The entry of almost all the international brands into India happened at the same time, while others closed down due to various strategies. McDonald’s survived only due to keen understanding of the Indian economy.

The massive and aggressive expansion strategies that McDonald’s took up in India was with the sole objective of establishing its presence indelibly in the sub continent and to prove to the world that if anything can sell in India it can sell anywhere. Today McDonald’s has become a household name and finds its kiosks in almost many schools colleges and corporate. It can be said that there is no food court without a McDonald’s and almost every Indian has tasted McDonald’s fast food. This is indeed a great breakthrough for a very orthodox community that has very rigid and fixed eating habits and traditionally very Indian.

McDonald’s had to make it clear to the authorities that their products in India neither contain beef nor pork in it. They had to suit their burgers to Indian taste and Indian market which was a hyper price sensitive market. The introduction of breakfast combos and budget meals made market penetration possible. “Aloo Tikki Burger” was McDonald’s priced product in India. Their quick turnaround times made new inroads into the fast food industry. (Mathur, S., 2011)

As providing value to the customer is the key, price sensitivity studies are conducted before determining the pricing. The rate of inflation is also reviewed. McDonald’s definition of value was far broader than of most of the restaurants in its competition.

The People and the Training-Critical to Employee Relations

Service is the key element of McDonald’s operations. Every employee strived in providing 100% customer satisfaction for every customer in every visit. This included friendly service, along with accuracy of an order taking and anticipations of customer’s demand.

When the Indian joint venture was formalized, the MTs were given extensive job training in Indonesia. MTs in human resources, real estate and buildings were hired and global directors worked with them to train them in the necessary areas. This was done through interactions as well as through exposure with the customer through operation training within the restaurants for a fixed period of time. The organization also provides ample opportunities of overseas training to those displaying potential.

The People and the Training

When the Indian joint venture was formalized, the MTs were given extensive job training in Indonesia. MTs in human resources, real estate and buildings were hired and global directors worked with them to train them in the necessary areas. The projected sales of each restaurant determined its staffing requirements. On the average, every restaurant has a staff of 40-60 people, including managers. Induction training was conducted at the time of an employee’s joining the organization. This was done through interactions as well as through exposure with the customer through operation training within the restaurants for a fixed period of time. The organization also provided numerous opportunities of overseas training to those displaying potential.

World over, McDonald’s believed in development of close relationships with suppliers and this is precisely what it has done in India.

In the process, McDonald’s actually encouraged entrepreneurship, by introducing the local suppliers to its global suppliers. This association involved transfer of state-of-the-art food processing technology, thereby leading to an improvement in quality standards and helping create world class manufacturing facilities in India. This was the first step towards creating the unique ‘cold chain’.

McDonald’s had positioned its restaurant as a family restaurant that barred smoking as well as serving of alcohol on its restaurant. The results were apparent and resulted in a 48% increase in footfalls along with 30% hike in the sales.

In the same year, the company aired its 1V commercial for the Rs. 7/- soft serve cone campaign, thereby establishing the value proposition of the company. However, this research indicated that the people are unaware of the quality of food served by the McDonald’s. This had led to creation of the advertising campaign by the company which started its focus on familiarizing customers with the quality of food served at McDonald’s. Consumer research had also pointed that a large mix of offerings were required in the vegetarian menu of McDonald and the company consciously addressed this need of its customers. The company had also become aware of the fact that eating out, though gaining frequency was still primarily a family affair. Hence, it was attributed mainly to evenings and weekends.

The ‘Happy Price Menu’ had come closer on the heels of the marketing initiative by the company “i’m lovin’ it” which McDonalds had launched in October 2003. The communication about this new offering was funky and funny and tells that McDonald’s is overall a great place, and at a best price – which restricted not only to its product, but also the experience. At the same time, it aims to make the service hassle-free and easy to use.

McDonald’s continuous product innovation and customer satisfaction through greater customer reach. In order to sustain in a very competitive market McDonald’s has to continuously think of bringing in new concepts into all its operations especially in marketing. McDonald’s had to bring in something that would help in long sustainability and that unrivaled position on the market as a “foodtailer”. The result of a spontaneous thought led to the introduction of breakfast outlets and a chance encounter with a technology specialist ended up with online booking orders and birthday parties and signature outlets. These are signature products of McDonald’s and this will in the long run help McDonald’s to improve it already ace services with better customer service and great shopping experience. The success of McDonalds in India could be measured by its continuous growth in Indian fast-food market with 210 branches across India .