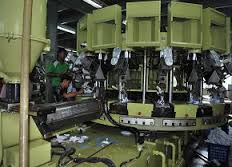 The Footwear Industry in Bangladesh has started since the colonial era, although its modernization took place only in the late 1980s. During the British period, there was no footwear manufacturing firm producing on a mass scale in East Bengal. However, a traditional cottage type footwear industry with limited production facilities existed in a skeleton form in the district towns during that time. Various types of footwear were imported, mainly from Calcutta. After the partition of Bengal in 1947, foot wears were imported from West Pakistan.

When Bata Shoe Company established its manufacturing plant at Tongi in 1962, it was the first manufacturing plant to produce shoes on a large scale in East Pakistan. In 1967, Eastern Progressive Shoe Industries (EPSI) established its production plant. It began exporting footwear to USSR, Czechoslovakia and England. Both Bata and EPSI held major shares in the local footwear market. The footwear industry suffered a major setback during the war of liberation but was rehabilitated after independence. New footwear manufacturing units have recently been established. Among them are Apex Footwear, Excelsior Shoes, and Paragon Leather and Footwear Industries.

Japan and Germany are now the biggest markets for Bangladeshi footwear but US buyers are increasingly showing interest in sourcing from Bangladesh. Bangladesh could have a billion dollar footwear export sector by 2013, claim local shoe manufacturers on the basis of both the current growth in shipments and the increased production capacity in factories under construction. If their assessment is correct, in a three-year period the level of exports can increase five-fold from the $205 million worth of shoes that were exported in the last fiscal year that ended in June 2010.

Bangladesh has a host of potential products that can earn substantially large amounts of foreign exchange, if only the necessary patronage from the overseas buyers is given for the sake of expanding the country’s export base and thereby reach a sustainable status for the country’s export trade.

Recently, a new opportunity has opened up to further diversify the range of Bangladesh’s export base by including footwear and other leather goods in the list of exports particularly to the European Union (EU) market.

However, the country has already been exporting finished leather and different kinds of leather products to the overseas markets. These products also enjoyed considerable demand because of their high quality. The main reason for this was the natural advantage of leather that Bangladesh produces. Despite the high quality of local animal hides both in raw and finished form, Bangladesh was still trailing behind Vietnam and China in the export of footwear and other leather products in the European and other markets.

Bangladesh is set to emerge as the next manufacturing hub for the global footwear industry. The cheap labor is prompting top manufacturers to relocate their factories in the country. The good news is that a number of foreign investors as well as buyers have already shown interest in Bangladesh’s leather and footwear sector.

Recently, the president of the Bangladesh Finished Leather, Leather Goods and Footwear Exporters Association (BFLLGFEA) informed all concerned that three large investors in the footwear sector from Taiwan would set up footwear factories in the Dhaka and Chittagong Exporting zones. The buyers from EU, as well as other very highly developed industrial nations like Japan have reportedly been showing importance in Bangladeshi leather products. All these developments look promising for the local footwear industry.

The Export Processing Zones at present have 18 shoe and leather goods factories but there are at least seven large factories under construction, mostly owned by big manufacturers in the shoe world. The factories under construction include Korean company Young one’s footwear complex which is said to be the largest in Asia. The company started construction of its mega shoe complex in Chittagong six months back. The first part of the complex will go into production by the middle of next year, and the company’s executives said they would be able to manufacture about 30 million pairs of shoes by 2013.

In addition, Taiwanese shoe manufacturer Pau Chen, which employs about 4,00,000 workers in its factories in China and 50,000 in Vietnam, is also building a large manufacturing facility in Chittagong. Australian manufacturer Bonbon Shoe, a supplier to Hugo Boss, and Xen Chen and Genford of Taiwan., are also building footwear factories in Bangladesh. Apex-Adeichi also has a new factory that will soon start production. With an annual turnover of about $100 million, the Bangladesh-Italy joint venture is now the largest exporter of footwear. However, with a new joint venture factory, Blue Ocean Footwear, due to go into production by February 2011, Apex will get involved with a turnover of nearly $200 million of footwear export by 2013.

The local footwear industry is experiencing an annual growth rate of 21 percent, according to a spokesman from another apex organization, Leather Goods and Footwear Manufacturers and Exporters Association of Bangladesh (LGFMEAB). However, to continue the trend, the present level of growth has not only to be attained; it also has to be taken to a still higher level, if Bangladesh is to match the success of its immediate competitor, Vietnam.

According to a newly released statistics from the Export Promotion Bureau of Bangladesh, footwear exports from the country grew from US$61 million in the period of July-November 2007 to $85 million in the same period of 2008, recording a growth of 39 percent. In the first four months of the 2010 fiscal year there has been $98 million worth of exports, a 65 per cent increase from the same period last year. Taking this rate of growth into account, shoe industry executives estimate that the current fiscal year’s footwear export is likely to cross $300 million. Though in the next two years the existing factories are likely to export more shoes, it is the new capacity that will come on stream from early 2011 that is expected to cause the huge spurt in growth.

Growth in exports is due to the low production cost in Bangladesh compared to its neighboring countries: China, India and Vietnam, who also have a very well entrenched leather and footwear export industry. Orders which earlier used to be given to China or India are now being handed out to footwear manufacturers in Bangladesh because they are able to produce low-priced but quality shoes, which have now found its way in to key markets in EU and Japan.

This growth in footwear exports has come as a blessing in disguise at a time when leather exports have fallen by a massive 18 percent in the period under review. Experts attribute the growth in footwear exports, thanks to machineries imported from Italy that is trusted for its quality output. In recessionary trends, high-priced products tend to register a negative growth, as consumers tend to shy away from them in preference for value for money items. In this scenario, it is a golden opportunity for the leather and footwear sector to increase its global market share.