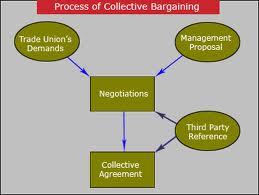 Processes of collective bargaining and negotiation

This will normally include procedures in respect of individual grievances, disputes and discipline. Frequently, procedural agreements are put into the company rule book which provides information on the overall terms and conditions of employment and codes of behavior. A substantive agreement deals with specific issues, such as basic pay, overtime premiums, bonus arrangements, holiday entitlements, hours of work, etc. In many companies, agreements have a fixed time scale and a collective bargaining process will review the procedural agreement when negotiations take place on pay and conditions of employment.