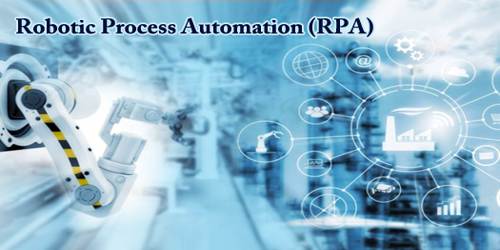 Robotic Process Automation (RPA) is basically a software technology that automates manual and repetitive tasks that would have been performed by humans otherwise. RPA is the use of software with AI and machine learning capabilities to automate business operations and to emulate the actions of a human within digital systems. The idea is to get a robot to do tasks that were previously done by humans.

Robotic process automation (RPA) is designed to help primarily with office type functions that often require the ability to do several types of tasks in a specific order. It creates and deploys a software robot with the ability to launch and operate other software. In a sense, the basic concept is similar to traditional manufacturing automation, which focuses on taking one portion of a workflow or even just one task and creating a robot to specialize in doing it. Office work often requires the same sort of repetitive effort, but since it is data being manipulated across platforms and applications, a physical robot is not necessary.

In traditional workflow automation tools, a software developer produces a list of actions to automate a task and interface to the back-end system using internal application programming interfaces (APIs) or dedicated scripting language. In contrast, RPA systems develop the action list by watching the user perform that task in the application’s graphical user interface (GUI) and then perform the automation by repeating those tasks directly in the GUI. This can lower the barrier to the use of automation in products that might not otherwise feature APIs for this purpose.

RPA tools have strong technical similarities to graphical user interface testing tools. These tools also automate interactions with the GUI and often do so by repeating a set of demonstration actions performed by a user. RPA tools differ from such systems that allow data to be handled in and between multiple applications, for instance, receiving an email containing an invoice, extracting the data, and then typing that into a bookkeeping system.

Well, RPA is not entirely a new concept; for years, people have been programming scripts to download data from websites or using recorders to record mouse-clicks. However, it is only recently were all these capabilities have been built into a product. It is basically a technology to formulate digital strategies through automation of rule-based, repetitive, and predictable tasks in combination with structured and stable data.

The hosting of RPA services also aligns with the metaphor of a software robot, with each robotic instance having its own virtual workstation, much like a human worker. The robot uses keyboard and mouse controls to take action and execute automation. Normally all of these actions take place in a virtual environment and not on screen; the robot does not need a physical screen to operate, rather it interprets the screen display electronically. The scalability of modern solutions based on architectures such as these owes much to the advent of virtualization technology, without which the scalability of large deployments would be limited by the available capacity to manage physical hardware and by the associated costs. The implementation of RPA in business enterprises has shown dramatic cost savings when compared to traditional non-RPA solutions.

There are however several risks with RPA. Criticism includes risks of stifling innovation and creating a more complex maintenance environment of existing software that now needs to consider the use of graphical user interfaces in a way they weren’t intended to be used.

Unlike deep learning, the software robots used in robotic process automation are programmed to do the tasks in a particular workflow by the employees with some assistance from programmers. The software doesn’t learn on its own or seek to tweak out new efficiencies or new insights like big data analysis or enterprise resource management (ERM) software. Instead, RPA works like a digital assistant for employees by clearing the onerous, simple tasks that eat up part of every office worker’s day.

As such, RPA is a simpler product than an artificial intelligence-driven system or enterprise software that seeks to bring all data inside the platform. This also makes it a relatively cheaper product than AI or ERM software. This simplicity and relative cheapness can make RPA a more attractive solution for many companies, particularly if the company has legacy systems. Robotic process automation is designed to play nice with most legacy applications, making it easier to implement compared to other enterprise automation solutions.

RPA is useful where there is a high volume of repetitive tasks and types of processes in which human participation is not necessary. The general idea of RPA is that software robots perform formerly human work. A major selling point for the adoption of RPA is, of course, the reduction in cost. In addition, the robot is going to do exactly what we tell it to do with less or no human participation and in less time possible with maximum accuracy and efficiency.

Of course, RPA is not just limited to finance. Any industry that deals in data and filing can benefit from robotic process automation. When software can reduce costs and increase efficiency without requiring an onerous and complex implementation, it will find eager users and useful applications in almost any sector.