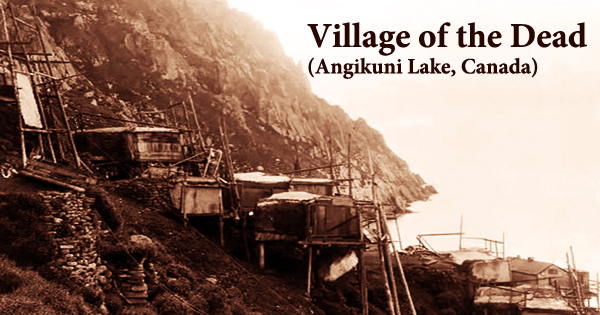 An entire town of men, women, and children vanished in the harsh northern winter of 1930, even the dead were missing from their graves. The Lake Anjikuni mystery has subsequently become one of Canada’s most lasting unsolved mysteries. Angikuni Lake (also known as Lake Anjikuni) is one of many lakes found along the Kazan River in Kivaliq Region, Nunavut, Canada. The lake’s coastline, which is part of the Hearne Domain, Western Churchill province of the Churchill Craton, is noteworthy for rocky outcroppings of the Precambrian Shield.

Joe Labelle, a Canadian fur trapper, was trekking near Anjikuni Lake in the Northwest Territories of Canada, which is now part of the current Nunavut region, on a chilly November day in 1930. He approached the town in search of housing after learning about an Inuit settlement nearby, only to find it entirely abandoned. During his search, he discovered unfinished meals, vacant huts packed with food and personal belongings, a recent fire left smoldering, a discarded repair of a junior sealskin that had yet to be completed, and no evidence of a fight that would have explained the people’s disappearance.

Whatever had occurred had compelled the whole community to flee the area. There were no traces, and the most horrifying revelation was the cause of the dogs’ absence. Every single one of them had died of starvation. All food, weapons, and clothing had been left behind. Labelle proceeded on to the nearest telegraph office, which was several miles away, and reported his incident to the Royal Canadian Mounted Police (RCMP) so that an official inquiry could be launched. Their investigation took testimony from a trapper named Armand Laurent and his two sons.

They said they observed a big cylindrical object morph into a bullet shape before going toward Anjikuni Lake when questioned. The RCMP discovered the frozen remains of the residents’ dogs on the shore, meals still hungover long-dead cooking fires, and boats still stood on the beach. They also discovered that every grave in the cemetery had been dug up and empty.

Animals were ruled out since the headstones were neatly arranged in heaps on each side of the graves. The RCMP later determined that the Inuit had been absent for about eight weeks before Labelle arrived, but they never found out why the entire population had abandoned the place. This is the narrative as told in Frank Edwards’ book Stranger than Science, published in 1959; additional versions may be found in Whitley Strieber’s science fiction novel Majestic and Dean Koontz’s horror novel Phantoms.

Trapper Armand Laurent and his two boys accompanied the Mounties on their way to the settlement. They inquired if Laurent and his boys had seen anything unusual in the region recently, and Laurent acknowledged that he had seen a weird shining object in the sky a few days prior. He said the item was in the air and could change shape, and that it was heading towards Lake Anjikuni.

Additional websites and books, such as The World’s Greatest UFO Mysteries (presented as truth), have a more complete account, which includes other usual elements such as unexplained lights in the sky, deserted graveyards, and over a thousand individuals missing. The tale was reprinted in the Danville Bee on November 27, 1930, by journalist Emmett E. Kelleher. According to the report, Joe Labelle discovered an abandoned Eskimo camp with six tents and 25 men, women, and children who had gone.

Given the Inuit people’s nomadic lifestyle, the RCMP classified the disappearance as seasonal or permanent desertion, however, they did note that they left their weapons and food behind. The hamlet didn’t appear to be devoid of human life; food was on plates, clothing were hanging from lines, guns were piled, half-cooked dinners were on stone; everything was there but humans. Labelle remained beside battered kayaks on the beaches of Lake Angikuni for a time, attempting to solve the riddle but failing, and terrified, he reported the odd occurrence to the Royal Canadian Mounted Police from a telegraph office a few kilometers away.

Many people do not believe the RCMP’s official position, which has left the issue wide open for some interesting alternate findings. When the police arrived in the village, they validated what Labelle had told before beginning a search. Surprisingly, no human remains were discovered, but the authorities did discover the frozen bodies of the villager’s dogs.

They found an even more enigmatic discovery at the village’s outskirts. The police discovered a multitude of opened and emptied graves, as well as the perplexing fact that the ground surrounding the tombs was difficult and virtually impossible to dig up. The reports of the RCMP officers who observed the weird lights in the skies during the first inquiry, as well as the peculiar flying object described by the Laurents, have sparked a popular hypothesis among UFO enthusiasts.

Labelle’s narrative has a few discrepancies that raise some red flags. The event occurred in November when temperatures were 13 degrees below freezing and Lake Angikuni had turned into a thin sheet of ice. This would indicate that beach kayaks would be unaffected by wave movement, however, this was not the case.

These kayaks were fashioned from sealskin stretched over willow, and despite being so far inland, Angikuni Lake displays no traces of willow or seals. These few discrepancies may be coincidences, but the fact that something awful happened in the town in 1930 cannot be overlooked. Something odd and unexplained occurred, causing the whole village’s people to vanish.

The strange fates of those vanished people are a popular ghost story to tell over a campfire, particularly when recounted under the stars in the Canadian north. Numerous requests for the RCMP’s case notes have been made, but no proof of an investigation has ever been located. This is just as ominous as any other occurrence in the past. While one aspires to find and comprehend the explanation, one also recognizes that certain things are beyond the human mind’s comprehension.