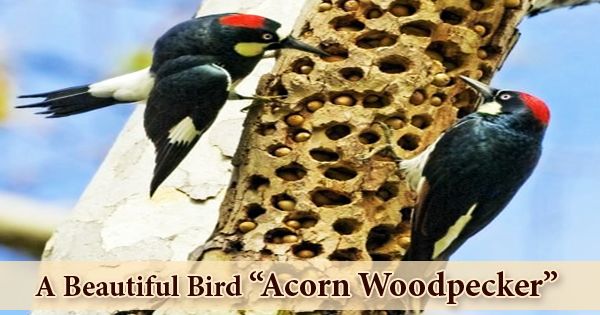 The acorn woodpecker (Melanerpes formicivorus) is about 8 inches (20 cm) long and can be found south to Colombia from the deciduous woodlands of western North America. It is a medium-sized woodpecker, weighing 85 g on average (3.0 oz). For winter food, it relies on acorns, storing a stock in holes it drills in the bark of trees. A boldly patterned black and white woodpecker with a white patch, a white rump, a black chest, a striped black lower breast, and a white belly at the base of the primaries. With a black ring around the base of the bill, a red crown band, a white forecrown closely attached to the yellow-tinged white throat, and black sides of the head setting off a staring white eye, the head pattern is striking. The red-headed woodpecker (M. erythrocephalus) is about the same size as the acorn woodpecker (19-23 cm (7.5-9 inches)), but is sparsely distributed east of the Rocky Mountains in open woodlands, fields, and orchards of temperate North America. The acorn woodpecker was formally described in 1827 from a specimen collected in Mexico by the English naturalist William John Swainson under the binomial name Picus formicivorus. The Latin formica meaning “ant” is paired with -vorus meaning “eating” in the particular epithet. In fall, members of the group harvesting acorns store them in hole-studded trees and feed on them in subsequent seasons. Insects are picked from the surface of the tree, or captured in an acrobatic, swooping flight. In comparison to most woodpeckers, insects seldom or never dig into the wood. It can feed on sap, dig in bark pits or visit those made by sapsuckers. In neighborhood groups, with raucous “Woody Woodpecker” calls, the acorn is loud and conspicuous. Call: loud wack-a, wack-a or ja-cob, ja-cob series. Also, a scratchy, drawn-out krrrrit or krrrit-kut, and a high, cawing urrrk. Drum: a simple, slow roll of about 10­–20 beats. 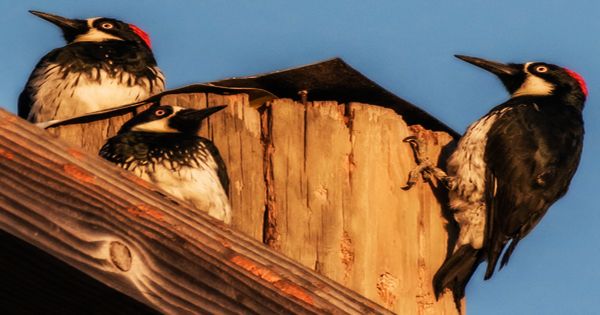 The adult male has a red crown and a white forehead. The female adult is similar, but a black band distinguishes the white forehead from the red crown. Juvenile: looks like an adult, except the black areas are duller and the iris is darker; both sexes of juveniles have a strong red crown like the adult male. Distinctive markers are the white-collar, throat, and forehead patches. They take a few flaps out of their wings while flying and drop a foot or two. When in flight, white circles on their wings are visible. There is a call from Acorn woodpeckers that sounds almost like they are joking. The breeding group consists of a pair, typically accompanied by extra birds, usually the earlier offspring of the pair or other similar people. The community can consist of 10+ birds (up to 16) that protect year-round communal food stores and nesting territories. The nest site is a tree cavity (almost always dead tree or dead living tree branch), 5-60 ‘above ground, normally 12-30’; excavated by both sexes and assistants. This species can occur in the north of its range at low elevations, but rarely in Central America below 1,000 m (3,300 ft), and it breeds up to the timberline. In a large cavity in a dead tree or a dead part of a tree, nests are excavated. Insects, sap, and berries are also fed to Acorn woodpeckers. In order to capture insects, consume fruit and seeds, and drill holes to drink sap, they can be seen sallying from tree limbs. 3-7 white eggs laid by the Acorn woodpecker. More than one female laying must be the product of nests with more eggs (up to 17 recorded). Incubation at first, primarily by both parents, with assistants, soon joining; incubating birds take turns, with rapid turnover, several times every hour often changing positions; Time for incubation: 11-14 days. In urbanized areas, competition for nest cavities by non-native species is an ongoing danger. The conservation of this species depends on the maintenance of functional ecosystems which provide the species with the full range of resources it depends on.