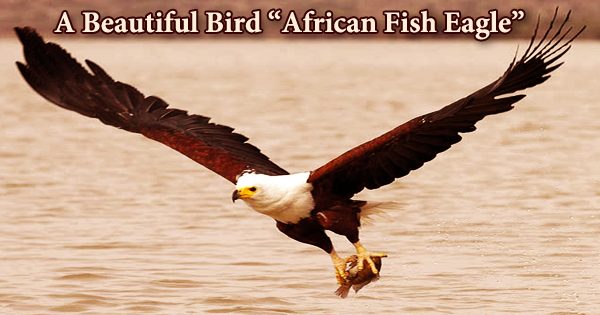 The African fish eagle (Haliaeetus vocifer), also known as African Sea Eagles or River Eagles, is a large species of eagle that can be found in Sub-Saharan Africa anywhere there are large bodies of open water and a plentiful food supply. It can be found living around bodies of water of almost any shape or size. Near ponds, estuaries, lakes, rivers, streams, coastal waters, and wetlands, this majestic bird of prey can be seen perched on trees or other prominent locations. It is Namibia’s and Zambia’s national bird. It is recognized in many languages as a result of its wide range. Nkwazi in Chewa, aigle pêcheur in French, hungwe in Shona, inkwazi in isiZulu, and ‘ntšhu’ (pronounced “ntjhu”) in Northern Sotho are some examples of names. This species resembles the bald eagle in appearance; but, although they are similar, they live on separate continents, with the bald eagle inhabiting North America. The African fish eagle is a sub-Saharan African bird that can be found across most of continental Africa south of the Sahara Desert. The Orange River in South Africa and Namibia, the Okavango Delta in Botswana, and Lake Malawi, which borders Malawi, Tanzania, and Mozambique, are all possible locations. African fish eagles can be found in large numbers near Lake Victoria and other large lakes in central Africa, especially those in the Rift Valley. These large birds of prey only need open water, plenty of prey, and a good perch to survive. Grassland, swamps, marshes, tropical rainforest, fynbos, and even desert-bordering coastlines, such as Namibia’s, are all home to these animals. African fish eagles are commonly found near freshwater lakes, ponds, and waterways, but they can also be found near the coast at river mouths and lagoons. Arid areas with no surface water are devoid of them. The African fish eagle is a species belonging to the Haliaeetus family (sea eagles). The critically endangered Madagascar fish eagle (H. vociferoides) appears to be its closest relative. This pair, like all sea eagle species pairs, consists of a white-headed species (the African fish eagle) and a tan-headed species (Madagascar fish eagle). There are two distinct calls made by the African Fish Eagle. The tone is similar to that of an American Bald Eagle in flight or perched. When it’s close to the nest, it makes a ‘quock’ sound, and the female is a little louder and less mellow than the male. The call of this bird is so well-known and simple that it is sometimes referred to as “Africa’s voice.”

The African fish eagle is a large eagle that can be found all over Sub-Saharan Africa near large bodies of open water with plenty of food. Adults have a brown body, a white head, and broad, strong black wings. Females weigh 3.2–3.6 kg (7.1–7.9 lb), while males weigh 2.0–2.5 kg (4.4–5.5 lb). In birds of prey, sexual dimorphism is common. Males have wingspans of about 2 meters (6.6 feet), while females have wingspans of 2.4 meters (6.6 feet) (7.9 ft). The body length is between 63 and 75 centimeters (25 and 29.5 inches). African fish eagles have a snow-white head, breast, and tail, with the exception of the featherless face, which is yellow. The color of their eyes is dark brown. Yellow with a black tip, the hook-shaped beak is suitable for a carnivorous lifestyle. In comparison to the adult, the juvenile’s plumage is brown and its eyes are paler. The eagle’s feet have rough soles and strong talons that allow it to grasp slippery underwater prey. While this species feeds primarily on fish, it is opportunistic and will eat a variety of prey, including waterbirds. For many, its distinctive cry evokes the spirit or nature of Africa. The African Fish Eagle is typically very territorial, which means it will fiercely protect its territory against other fish eagles or any other bird or critter it perceives as a threat. While it eats a lot of fish, as its name implies, it also eats flamingos and other water birds in certain areas. It is graded as a kleptoparasite (it steals prey from other birds) and is known to consume carrion. Fish Eagles have been known to steal a portion of Goliath Herons’ capture. Fish, often dead, but often alive, is their primary source of nutrition. The most common fish captured are catfish and lungfish; larger prey is consumed on the ground near the sea. As shown by the variety of habitat types in which this species can be found, including grassland, swamps, marshes, tropical rainforest, fynbos, and even desert-bordering coastlines, this is a generalist species that requires only open water with ample prey and a good perch. During and outside of the breeding season, African Fish Eagles are often seen in pairs, sometimes sharing kills. They spend more time perched than flying, and after killing, they normally retire for the day by 10 a.m., but they can kill at any time of day. During the dry season, when water levels are low, African fish eagles breed. It is thought that they mate for life. One to three eggs are laid by the female, which are mostly white with a few reddish speckles. The female does the majority of the incubation, but the male takes over when the female goes hunting. The eggs hatch a few days apart, and the oldest chick always kills the younger chicks. The young will remain in the nest for 70 to 75 days, after which time they will be able to feed themselves and become self-sufficient. These birds interact with one another through vocalizations, which they use to build and retain territories. Males make higher-pitched calls, while females are quieter. The traditional call is a “weee-ah, hyo-hyo or a heee-ah, heeah-heeah,” which is louder when uttered by males. When they get close to the nest, they make a quiet “quock.” Though the African Fish Eagle is still common throughout its range, overfishing is threatening its food supply. Fish and other lake-dwelling species can be poisoned by pollution and runoff from nearby factories and even flower farms, leaving the African Fish Eagle with little options for food. Protecting the continent’s lakes from pollution and overfishing are two crucial steps in the African Fish Eagle’s conservation.