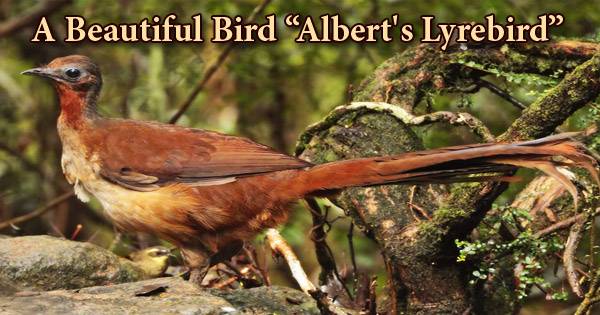 In a small area on the state boundary between New South Wales and Queensland, the Albert Lyrebird (Menura alberti) is a shy, pheasant-sized songbird that is endemic to Australia’s subtropical rainforests. It was named after Prince Albert, the United Kingdom’s Prince Consort to Queen Victoria. It lacks the superb lyrebird’s elegant lyre-shaped tail feathers and is found in a much more restricted range. In the past, the lyrebirds of Albert were shot to be eaten in pies, to provide “globe-trotting curio-hunters” or vandals with tail feathers. It is a large, long-tailed, mostly ground-dwelling bird with a rich plumage of chestnut brown, slightly paler and greyer below. The male has a long and beautiful tail that incorporates plumes, filamentary feathers, and large ‘lyrates’ like ribbon. There is a shorter and simpler structured tail for the female that appears more pointed. Just 3,500 breeding birds are known to be the total population of Albert’s lyrebirds and have one of the smallest distributional ranges of any species on the continent. Albert’s Lyrebird can be distinguished by its richer brown plumage and, in males, less elaborate lyrate tail feathers, from the more common and widespread Superb Lyrebird Menura novaehollandiae. 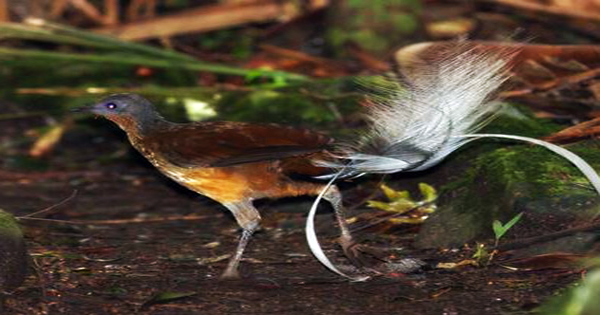 Albert’s Lyrebirds have a wingspan of 76–79 cm (30–31 in) and weigh about 930 g (33 oz). The length of this pheasant-sized songbird is around 35 inches or 90cm. The upper plumage is brown; a dark chestnut is a plumage below. The bill is black; the iris is dark brown or black, and the eye is surrounded by a broad, blue-grey ring. They have brownish-gray legs and feet, dark grey or black. The Lyrebirds of Albert are heard much more often than seen; they are quiet and cautious and difficult to approach. Usually, they occur separately or in pairs. Their loud, piercing calls are frequently interspersed with other species’ mimicry. The male stretches his tail forward over his head and body in the show and shakes it, while calling loudly. The female tail is shorter, simpler, slightly drooping and, when closed, appears more pointed; it consists of a pair of median plumes, long, narrow and tapered, and entirely webbed, large, brown feathers with rounded tips, but lacks filamentaries. The male bears its tail in an upward-curving train while walking. Juveniles at close range can be isolated from adults. This bird mimics other bird species’ sounds. At one point, the voice will make deep and resonant sounds, switch to high, thin squeaks and trills, then switch to harsh noises again. Some of the song’s passages begin with a gentle, mellow sound that has been compared to the howl of a dingo, growing clearer and louder. The diet is made up of insects collected on the floor of the forest and on rotting logs. Eat invertebrates living in the soil and leaf litter, particularly insects and their larvae, but, interestingly enough, earthworms have not yet been observed to eat. With clutches found between late May and mid-August, breed over winter. The nest is installed on a rocky ledge, in fissures between rocks, between rocks, or sometimes on steep rock faces or cliffs in caves. Birds prefer the rainforest with a dense understorey of vines and shrubs, or the dense understorey of rainforest plants with a wet sclerophyll forest, like a temperate rainforest. They are sometimes reported in mixed eucalyptus forest areas, with a mesic understorey, around gullies and lower slopes, and in wet gullies with limited quantities of the rainforest. Females lay a single egg and conduct all of the parental care, with no function for the male. Intensive forest management and the substitution of ideal habitat with plantations of unsuitable plants, such as eucalyptus or hoop pine, are the main threats to Albert’s lyrebirds. Global warming and its predicted consequences (change in habitat, change in fire frequency/intensity) could be a possible future threat to the lyrebird, and large-scale fires could potentially affect the population as a whole.