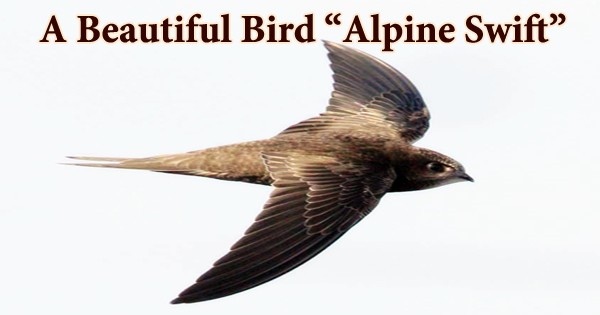 The Alpine swift (Tachymarptis melba) is a small bird; the largest European swift was formerly known as Apus melba. Thanks to its larger size, slower wingbeat, and distinctive vocalizations, it can be said apart from other species of swifts. The genus name is “fast” from the Ancient Greek takhus, and “seizer” from marptis. These birds have very short legs that they use only for vertical surfaces to stick to. Alpine swifts breed from southern Europe to the Himalaya in the mountains. They are highly migratory, like common swifts, and winter far farther south in southern Africa. Alpine swifts are readily distinguished by their larger size and their white belly and throat from the common swifts. With a wingspan of 57 cm (22 in) and a weight of about 100 g, they are around twice as big as most other swifts in their size, around 20 to 23 cm (7.9 to 9.1 in) in length (3.5 oz). Swifts have very short legs that are used for vertical surface clinging. They never settle on the ground willingly, spending most of their lives in the air on the insects they capture in their beaks, feeding on them. Alpine swift are able to stay aloft in the air for up to seven months at a time, even drinking water “on the wing”. In mountains from southern Europe to the Himalayas, Alpine Swifts breed. They are heavily migratory, like the Common Swifts, and winter far farther south in southern Africa. They wander widely on migration, and in much of southern Europe and Asia, they are seen frequently. During the last ice age, the species seems to have been even more widespread, with a large colony breeding about 40,000-20,000 years ago at the Komarowa Cave near Czestochowa, Poland, for example.

The Alpine Swift has a dark brown body, divided by a brown line running across its chest, with a white belly and throat. From a point, the white throat is scarcely visible. The bird resembles a large barn swallow or house martin superficially. However, it is entirely unrelated to certain species of passerine, since swifts are in the order of Apodiformes. The similarities between the groups, indicating similar lifestyles, are due to convergent evolution. The call is made up of noisy, drawn-out twitter series that at the end either speed up or slow down and drop slightly in pitch. The Alpine swift is distributed patchily throughout sub-Saharan Africa, and is most prevalent in southern Africa, especially in Namibia and South Africa. It forages in flocks of mixed species, along with other swallows and swallows, and can fly up to 1000 km per day. It prefers to fly at very high altitudes, but often it comes down to the ground to feed on grasshoppers, honey bees, etc. The scientific name Apodidae comes from the ancient Greek apodidae, apous, which means ‘without feet.’ They never sit on the ground willingly. They have a short-forked tail and very long swept-back wings that resemble a boomerang or a crescent but can be stretched straight out (as in the image). The flight is slower and heavier than its smaller counterpart. In a suitable cliff hole or cave, Alpine Swifts build their nests in colonies, laying 2-3 eggs. Year after year, a swift will return to the same location, restoring its nest when needed. If bad weather prevents their parents from catching insects nearby, young swifts in the nest can drop their body temperature and become torpid. The Alpine Swift spends much of its time in flight, trapping in mid-air insects and arachnids. This species, a long-range migrant, enters its breeding grounds in Europe between March and April and leaves in September for southern Africa. The Alpine Swift is a monogamous bird, nesting in small colonies and reusing its old nest year after year. The female lays three eggs between June and August; the chicks, altricial, need to be fed constantly by both parents. On the wing, they drink, however they roost on vertical cliffs or walls. This species is sometimes divided into the genus Tachymarptis, and the related African species Mottled Swift, but genetic evidence indicates that this will leave the remainder of Apus paraphyletic. A 2013 study revealed that Alpine swifts can spend more than six months flying without having to land. It is possible to conduct all essential physiological functions, including sleep, while in the air.