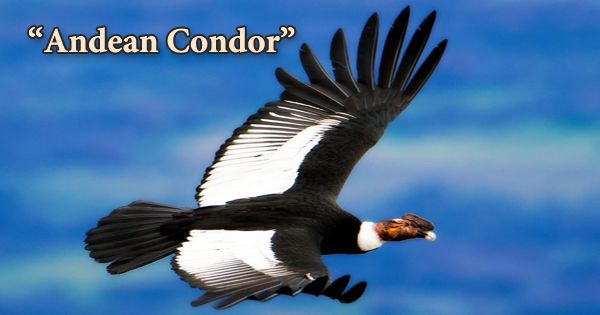 The Andean Condor (Vultur gryphus) is the world’s largest raptor and South America’s largest flying bird. Over the mountains and valleys of the Andes, it flies majestically. In the New World vulture family Cathartidae, it is a South American bird and is the only member of the ‘Vultur’ genus. The Andean condors are huge birds, among the largest that can fly in the world. And their enormous 10-foot wingspan requires some support to hold them aloft since they are so heavy (up to 33 pounds). For that reason, these birds tend to live in windy areas where, with little effort, they can glide on air currents. As their name suggests, these species are found in mountainous areas, but they also live near coasts full of ocean breezes and even deserts with intense thermal air currents. It has a maximum wingspan of 3.3 m (10 ft 10 in) surpassed only by the wingspans of four water birds, the maximum wandering albatross, southern royal albatross, broad white pelican, and Dalmatian pelican of approximately 3.5 m (11 ft 6 in). As its name suggests, along the Pacific coast region of western South America, the Andean Condor inhabits most of the Andes Mountain range. It can be found all the way south to Tierra del Fuego, from Colombia and northwestern Venezuela. In the southern part of its range, this large scavenger can be seen soaring over high montane canyons and peaks throughout the Andes or along the coast. As it looks for food, it also soars over open grassland areas. The majority of these condors are black, but males have a distinctive white “collar” around their necks and even some white markings on their wings. The Andean condors, like their cousins, the California condors, have bald heads. People catch condors for their rituals in some countries. The Andean Condors, most frequently, die a very slow death. The condor is bound to the back of a bucking bull in one ceremony. The bird is bound to a frame in another and struck over and over before it dies.

The only New World vultures to display sexual dimorphism are Andean condors. Males are typically larger than females and, on top of their head, have a distinctive comb, as well as a large neck wattle and yellow eyes. The females have red eyes and lack a comb. It is also usually heavier, hitting a weight for males of 11-15 kg (24-33 lb) and for females of 8-11 kg (18-24 lb). The overall length can range from 3 ft 3 into 4 ft 3 in (100-130 cm). The wing chord is 75.7–85.2 cm (29.8–33.5 in) among normal measurements, the tail is 33–38 cm (13–15 in), and the tarsus is 11.5–12.5 cm (4.5–4.9 in). Typically, measurements are taken from specimens reared in captivity. The mean weight is 11.3 kg (25 lb), with males averaging approximately one kilogram more at 12.5 kg (28 lb), and females a kilogram less at 10.1 kg (22 lb). As soon as it hatches, the males hold the comb all their lives, making it easy to say the sex of an Andean condor chick. As adults, both sexes have white secondary feathers with black plumage and white neck ruffles. Juveniles have brown plumage and skin and, when they are about six years old, do not acquire their adult coloring. They normally lay one or two eggs. It is one of the longest-living birds in the world and, in some cases, has a life span of over 70 years. For any living flying bird or mammal, condors have the highest average weight, ahead of trumpeter swans (Cygnus buccinator) and Dalmatian pelicans (Pelecanus Crispus). Condors are vultures, but for the carriage that makes up much of their diet, they keep their keen eyes peeled. They tend to feast on large animals, whether wild or domestic and perform an essential role as a natural clean-up crew when picking the carcasses. Condors can feed on dead marine creatures including seals or fish along the coasts. These birds do not have the sharp claws of a predator, but they can attack the nests of birds for eggs or even young hatchlings. The Andean Condors all get together at night to sleep. Relatively large numbers of them can be found, roosting on inaccessible cliffs and rocky outcrops. To help keep them protected from ground predators, these areas are up high. There is no syrinx (similar to our larynx) in Andean condors, so they do not vocalize; instead, they hiss, click, and grunt to connect. In Peru, Chile, and Argentina, Andean condors are most commonly seen today, although a reintroduction program is taking place in Colombia. Wing color pattern observation, and the size and shape of the crest of the male, are the best ways of identifying individual Andean condors. Andean condors use their excellent eyesight to locate their food and can spot a meal from high up in the air. For their next meal, they often look for signs, such as other raptors gathering on the ground in one place or circling in the sky. For Andean condors, meadows are critical in southern Patagonia as this habitat is likely to have herbivores present. The locations of meadows, as well as cliffs for nesting and roosting, are also affected in this area by Andean condor distributions. Condors, like all vultures, have very few feathers on their backs. They often bring their heads deeply into the cavities of rotting, stinky carcasses when they feed. They could cause bacteria or germs to develop if particles of this meat get deep into their feathers. A bald head leads to keeping condors clean. Generally, Andean Condors feed on large carriages, such as the remains of deer, cows, sheep, and the like, but when they can find them, they will eat smaller animals. These birds can eat more than 6.8 kilograms (15 pounds) of meat at one time, and they may not be able to fly after such a large meal. When the chick hatches, both parents have been responsible for their treatment for more than a year, even after six months of fleeing the chick. The young condor spends this time learning from his parents how to be a condor, everything from how to catch a hot spring to what to eat and how to find it.