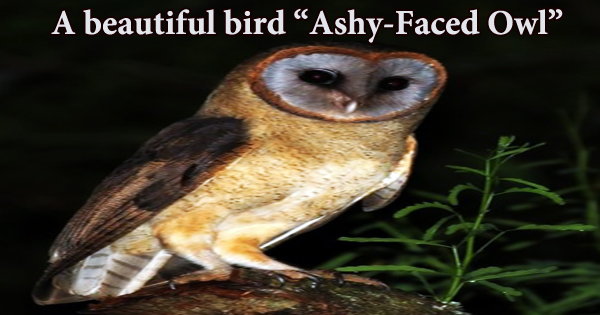 The ashy-faced owl (Tyto glaucops) belongs to the Tytonidae family of owls. It’s only found on Hispaniola, a Caribbean island (split between Haiti and the Dominican Republic). Subtropical or tropical dry shrubland, subtropical or tropical high-altitude shrubland, and highly degraded former forest are its native habitats. The Ashy-faced Owl is similar to the common American Barn Owl, which also lives on Hispaniola, but it has a brighter buffy underbelly, more evenly brown upperparts, and an ashy-gray facial disk. The ashy-grey facial disc has a pronounced orange-brown ring. The bottom border of the eyes, which are blackish-brown, has a slight brownish wash. It has a yellowish-horned bill. Yellowish-brown upperparts with blackish vermiculations. The wrist edge of the wings is orange-brown, and the wings are yellowish-brown with tiny black mottling. A few black bands go through the primaries, secondaries, and tail. Yellowish-brown underparts with black arrow-shaped markings. The legs are feathered yellowish-brown and rather lengthy. The toes are naked, greyish-brown, and bristling sparsely. The claws are a dark brownish-black color. Adults measure from 26 and 43 centimetres (10 and 17 in) in length and weigh between 200 and 400 grams (7.1 and 14.1 oz). The bird makes a fast succession of clicks followed by a wheeze, as well as a loud scream. The Ashy-faced owl’s habits are unknown, although they are presumably comparable to those of other barn owls. The ashy-faced owl is only found on Hispaniola and a few other smaller islands, however, it is more numerous in the Dominican Republic than in Haiti. Forest and open woodland are its preferred habitats, and it is frequently seen near cities and villages.

This owl’s breeding habits are unknown, although they are presumably comparable to those of other barn owls. The ashy-faced owl is a non-migratory resident species. It builds its nest in tree holes, rock crevices, rocky ledges, and inside structures. Between the months of January and July, a clutch of three to seven eggs is deposited. The ashy-faced owl, like most other owls, is nocturnal and feeds on tiny vertebrates. Around 1950, the barn owl (Tyto alba) was discovered in Hispaniola for the first time. In the Dominican Republic, a research was conducted to establish the diets of both owls and if they compete for food. The results were published in 2010. This was accomplished by studying the owls’ regurgitated pellets, which include their prey’s undigested bones, hair, and feathers. It was discovered that they devour over 100 different types of prey, with 92 species in common. Small animals dominated both diets, especially in the American barn owl’s, and accounted for the majority of the biomass. Although both owls grabbed a comparable number of bats, the ashy-faced owl caught more birds. Barn’s facial disk can be either whitish or buffy, or white with a buffy patch that matches the tone of its underparts, but Ashy-gray faced’s facial disk contrasts with its buffy coloring. Barn’s upperparts are generally a blotchy combination of buff, brown, and gray, with specks of white and black intermingled, but Ashy-are faced’s dark brown with some buffy tones mixed in. In addition, the ashy-faced owl ate more amphibians and reptiles than the American barn owl. There was no way of knowing if the rivalry for food brought on by the advent of the American barn owl was beneficial to the native species. The IUCN classifies the ashy-faced owl as Least Concern on its Red List of Threatened Species. This is because it has a large range over Hispaniola (primarily the Dominican Republic) and its population looks to be steady, despite the fact that it is not common.